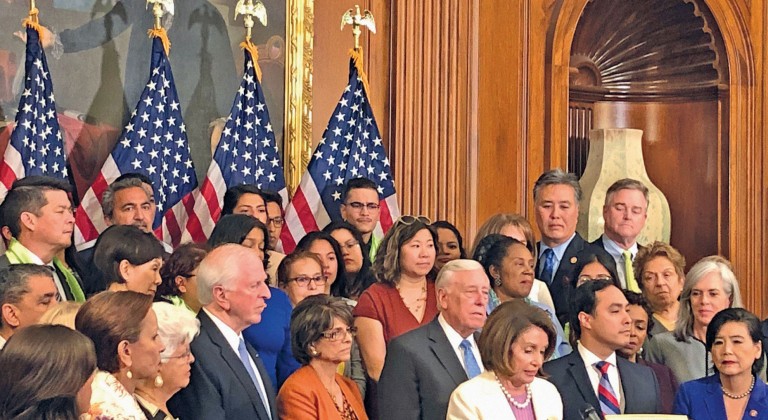 If you asked any Average Joe in NYC how they feel about national politics and its Castle Grayskull—Washington, D.C.—you’ll probably get some pretty colorful answers. Yet we’d bet that the vast majority of said vivid responses cannot be printed in our family-friendly newspaper.
When we think of D.C., exercise in futility comes to mind. (And that impossibly clean subway system.)
For example:
We were encouraged late Tuesday night to learn that the U.S. House of Representatives had passed the American Dream and Promise Act by a vote of 237–187.
According to House records, the measure:
• Cancels and prohibits removal proceedings against certain aliens and provides such aliens with a path toward permanent resident status.
• The Department of Homeland Security or the Department of Justice shall cancel removal proceedings against certain aliens who entered the United States as minors and grant such aliens conditional permanent residence status for 10 years. The bill imposes various qualification requirements, such as the alien being continuously physically present in the U.S. and being enrolled in or having completed certain educational programs. Aliens who were eligible for Deferred Action for Childhood Arrivals (DACA) status and not disqualified for renewal also qualify.
• DHS shall remove the conditional permanent resident status granted to such aliens, if the alien applies and meets certain requirements, such as completing certain programs at an educational institution or serving at least two years in the Uniformed Services and being discharged honorably.
• This bill also repeals a restriction that bars states from providing higher education benefits to undocumented aliens unless those benefits are available to all U.S. citizens.
• DHS or DOJ shall cancel removal proceedings against certain aliens who qualified for temporary protected status or Deferred Enforced Departure status on certain past dates (both statuses temporarily protect covered aliens from removal). For such aliens who apply, DHS shall grant permanent residence status.
• When DHS eliminates temporary protected status for nationals of a foreign country, it shall report to Congress its reasons for doing so.
Congresswoman Grace Meng (D-Flushing), an original cosponsor of the bill, said that the approval of it “is not just a critical step toward ensuring they can continue to live in this country where they have spent most of their lives—it upholds the values and promises of our nation.”
Well said, congresswoman.
Jin Park, Meng’s constituent from Flushing who is the first DACA recipient to be awarded a Rhodes Scholarship, added, “Like all Dreamers, the United States is my home… Passing H.R. 6 is an important step toward permitting Dreamers like me to fulfill their potential and contribute to American society.”
Earlier this year, Park was Meng’s guest at the State of the Union address. Meng said she invited Park “in an effort to stand against President Trump’s cruel immigration policies.”
On Tuesday night, Meng, basking in the afterglow of a Dream fulfilled, called on her colleagues in the Senate “to immediately take up this measure.”
Not like it matters. Even if it somehow passed the Upper Chamber, this important piece of legislation is dead on arrival: The White House said this week that, no matter what, Trump would veto it.
Dream, meet Nightmare.