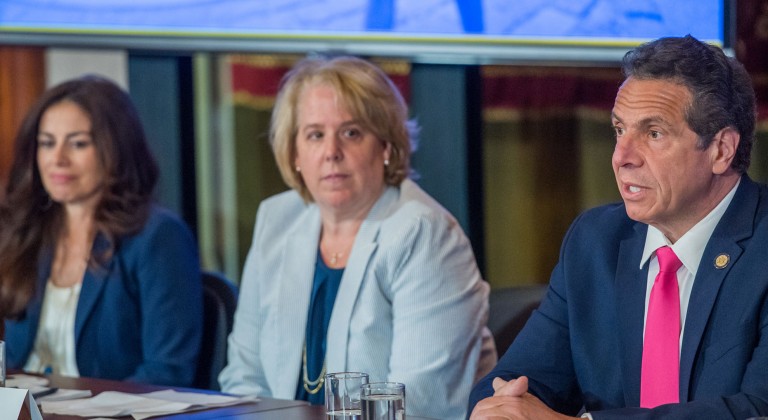 On Monday, Cuomo launched the Women’s Justice Agenda: The Time Is Now campaign.

By Michael V. Cusenza
Governor Andrew Cuomo can see the curtains beginning to cascade, and he knows he needs several legislative victories for the 2019 session in Albany, which will come to a close in a couple of weeks, to be a resounding political success. And none of those 10 or so tentative wins on his ledger seems to be getting the kind of urgent attention and full-throated push like that of the Women’s Justice Agenda – a set of initiatives aimed at improving reproductive, economic, and social justice for all Empire State women.
On Monday, Cuomo launched the Women’s Justice Agenda: The Time Is Now campaign. The operation will press the State Senate and Assembly to pass the Equal Rights Amendment, eliminate the statute of limitations for rape in the second and third degrees, further strengthen New York’s pay equity law and pass further protections against sexual harassment in the workplace.
Though the proposals were introduced in the governor’s Fiscal Year 2020 Executive Budget, they were not adopted by the Legislature, leaving them to be considered outside of the spending plan during the remainder of the legislative session, Cuomo’s office noted.
According to the administration, the Equal Rights Amendment will add sex as a protected class to Section 11 of Article 1 of the State Constitution. With this change, Section 11 of Article 1 of the State Constitution will read: No person shall be denied the equal protection of the laws of this State or any subdivision thereof. No person shall, because of race, color, sex, creed or religion, be subjected to any discrimination in his or her civil rights by any other person or by any firm, corporation or institution, or by the State or any agency or subdivision of the State.
The WJA also targets the statute of limitations for rape. While New York removed the statute of limitations for first-degree rape, a five-year statute of limitations remains for rape in the second degree and third-degree rape. Advancing legislation to eliminate the statute of limitations for rape in the second and third degrees will allow victims the full opportunity to obtain justice, Cuomo said.
Additionally, the agenda seeks to strengthen NY’s pay equity law and increase protections against harassment in the workplace. Under the WJA, Cuomo has indicated that he wants to expand the definition of “equal pay for equal work” to require equal pay on the basis of race, ethnicity, gender, and other protected characteristics, and expand the requirement that equal pay be provided for all substantially similar work, adding flexibility in recognition of the complexity of the issue.
The WJA, according to the administration, will advance legislation to: lower the bar set for employees to hold employers accountable under the New York Human Rights Law for sexual harassment by amending the requirement that conduct be “severe or pervasive” to constitute actionable conduct; protect employees’ rights to pursue complaints by mandating that all non-disclosure agreements in employment contracts include language stating that employees may still file a complaint of harassment or discrimination with a State or local agency and testify or participate in a government investigation; and
ensure workers know their rights, by requiring all employers to conspicuously post a sexual harassment educational poster in their workplace.