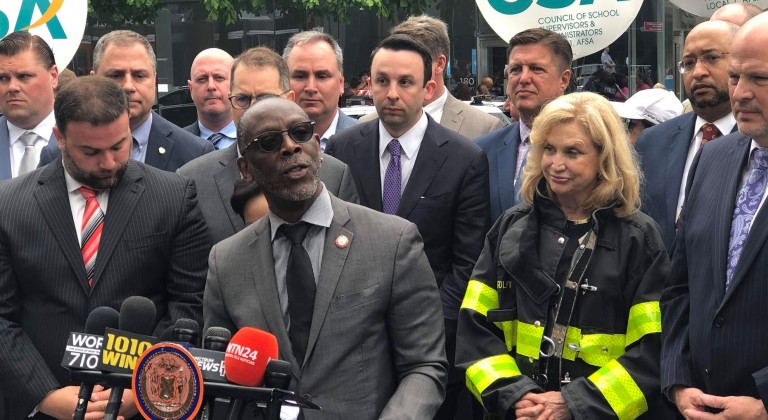 “The notion that the 9/11 Victim Compensation Fund could one day cease to exist is unimaginable,” Councilman Miller said.

By Michael V. Cusenza
Active duty and retired first responders, and selfless men and women who aided in the recovery effort at Ground Zero after the Sept. 11 terrorist attacks on the city recently rallied in Manhattan with elected officials and advocates to continue to compel Congress to approve legislation that would make the September 11th Victim Compensation Fund permanent.
Councilman I. Daneek Miller (D-St. Albans) and Councilwoman Margaret Chin (D-Manhattan) announced at last week’s demonstration that they have introduced Resolution 897, which calls on the Senate and House of Representatives to enact Never Forget the Heroes: Permanent Authorization of the September 11th Victim Compensation Fund Act in order to make the VCF permanent, and provide it with full financing through Fiscal Year 2090. The bill has earned the bipartisan support of more than 330 congressional officials and is scheduled to be heard next month by the House Judiciary Committee, Miller noted.
Sponsored by Sen. Kirsten Gillibrand (D-N.Y.) and Rep. Carolyn Maloney (D-Queens, Brooklyn, Manhattan), Never Forget the Heroes would ensure that all Sept. 11 first responders and survivors who have been injured by the toxins at Ground Zero and have certified Sept. 11 illnesses would receive their full compensation through the VCF now and into the future as more become ill with Sept. 11 cancers.
The measure, which was introduced in February, would also close the disconcerting funding gap detailed earlier this year by VCF Special Master Rupa Bhattacharyya. In the fund’s Seventh Annual Status Report and Third Annual Reassessment of Policies and Procedures, both published in February, Bhattacharyya indicated that a VCF funding shortfall—due in large part to an incredible escalation in the number of claims filed in 2018 on account of a surge in the rates of serious illnesses suffered by members of the Sept. 11 community and the increasing number of deaths that can be attributed to Sept. 11 exposure—has forced her to significantly decrease future payouts. For any claim or amendment submitted on or before Feb. 1, 2019, the payout will be reduced by 50 percent. For any claim or amendment submitted on or after Feb. 2, 2019, the payout will be reduced by 70 percent.
“The stark reality of the data leaves me no choice,” Bhattacharyya said.
Established in 2001 to support individuals who suffered physical harm or were killed as a result of the aircraft crashes of Sept. 11, 2001, or the debris removal efforts that took place in the immediate aftermath of those crashes, the VCF paid out more than $7 billion to the surviving family members of victims, as well as more than 2,600 other claimants who sustained related injuries, before it closed in 2004. It was reopened in 2011 after then-President Barack Obama signed the James Zadroga 9/11 Health and Compensation Act into law, which Congress reauthorized in 2015.
“The notion that the 9/11 Victim Compensation Fund could one day cease to exist is unimaginable,” Miller said.
More than 2,000 active duty City Fire Department personnel and nearly 1,000 from the NYPD have been forced into retirement due to disabling Sept. 11 injuries. A combined 380 members of the FDNY and NYPD have died from such injuries over the last 18 years.