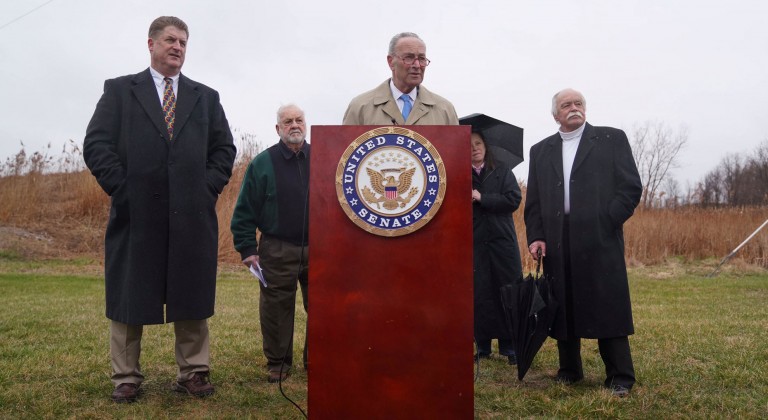 “The bottom line here is that if this is a problem in New York City, then this is a real issue across America,” Sen. Schumer said on Sunday.

By Michael V. Cusenza
Slow internet speed is likely plaguing roughly 4.7 million New Yorkers in the city and Long Island alone, according to data in a recently released Microsoft report—and Senate Minority Leader Chuck Schumer (D-N.Y.) on Sunday demanded that corrective action be taken immediately.
Microsoft’s analysis, according to Schumer, calls into question the way by which the Federal Communications Commission reports on broadband coverage, collects the information that delivers the data, and regulates broadband provider’s advertising of internet speeds. Schumer said he’s urging the FCC and providers to develop a response that ensures accurate reporting and better coverage, which translates into fairer price.
According to Schumer, broadband is a transmission technique that enables a large number of messages to be communicated simultaneously. Broadband speed is important, because the faster your internet is, the more you can do online. It also means more people can use the internet at the same time without affecting each other’s consumption. Because of its high access speeds, broadband internet service is the most used form of internet access. Schumer noted that 25 megabits per second (mbps) is the minimum broadband speed for downloads as defined by the FCC.
New York’s senior senator is calling on the FCC to conduct a thorough review into the huge disparity between the provider-supplied data and the data generated by specific households and their internet devices via the Microsoft study. Specifically, Schumer is calling into question federal policy that allows providers to account for areas where they are not actually providing service. In fact, Schumer pointed out that service providers can use the coverage of one household in a census block to account for coverage throughout the entire area. The FCC then uses this faulty data, which is self-reported by providers to the agency, to assess the state of broadband access in America and complete its annual broadband report.
“The FCC needs to account for the massive disparity in reported speeds and the real frustration of many New Yorkers who are at a net loss all around when their internet service is slow, possibly paying for speeds that are not as advertised and losing out on their own productivity. The bottom line here is that if this is a problem in New York City, then this is a real issue across America,” Schumer said.
The senator on Sunday also pointed out that the discrepancy between the FCC’s and Microsoft’s broadband data is particularly relevant in the five boroughs and Long Island. The FCC reports that the percentage of people who don’t use internet at broadband speeds in NYC and Nassau and Suffolk counties is less than 1 percent. However, Microsoft’s analysis shows “a massive disparity” in those figures.
For example, according to the FCC, less than 1 percent of the people in Queens are without true broadband or slower than acceptable internet speeds. Microsoft’s study shows that that number is actually 48 percent, or 1,100,000 people that live in The World’s Borough.
“While we live in an era of faster and faster, the reality of internet speed across New York is that it may move more like molasses than lighting,” Schumer quipped.