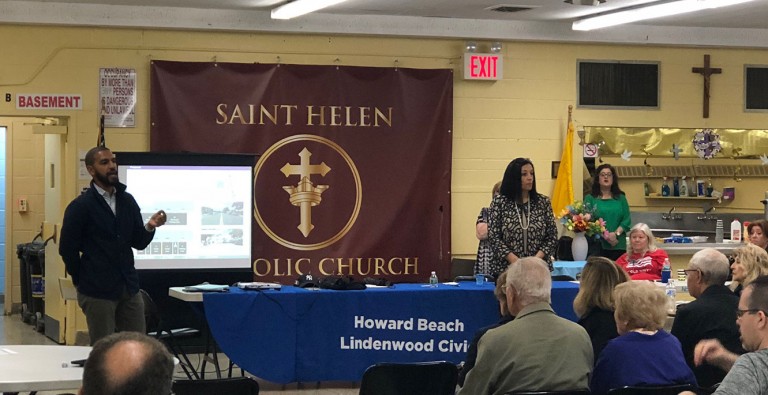 By Michael V. Cusenza
The City Department of Transportation on Tuesday presented its proposals for new bike lanes in Howard Beach to and unconvinced, yet engaged, audience at the Howard Beach Lindenwood Civic Association meeting at St. Helen Catholic Academy.
According to DOT Queens Deputy Borough Commissioner Jason Banrey, to provide traffic calming in Howard Beach and increase access and connectivity to the Jamaica Bay Greenway and the Joseph P. Addabbo Memorial Bridge, the agency is proposing to install a parking-protected bicycle path along 165th Avenue from 84th Street to Cross Bay Boulevard; and standard bike lanes on 84th Street from 157th Avenue to 165th Avenue.
“165th Avenue is really dangerous,” Banrey said; heads nodded in agreement when he raised the years-long concern of drag racing along the avenue. “[The parking-protected path] would make it safer on 165th. There’s an opportunity to solve the speeding issue.”
According to DOT, parking-protected bike lanes reduce conflicts and increase safety by: separating bikes from moving vehicles; the design calms traffic with standard width travel lanes; increases predictability of cyclist location for drivers and pedestrians. It also creates a new neighborhood amenity; extends the greenway experience; provides comfortable space for cyclists of varied ages and experience levels; and encourages physical activity, such recreational bike rides, walking, jogging.
Several residents at Tuesday’s meeting were concerned about the loss of parking spots to bike lanes. According to the DOT plan, there will be no changes to parking conditions along the north side of 165th Avenue; however, 10 parking spaces on the south side of the strip would be “repurposed” under the parking-protected bicycle path plan.
According to officials, the 84th Street standard bike lane proposal boasts: wayfinding to guide cyclists to Jamaica Bay Greenway and proposed protected path along 165 th Avenue; organized roadway, calm traffic; provide dedicated space for cyclists; and no parking removal or travel lane removal.
Still, many in attendance at Tuesday evening’s meeting voiced concerns about traffic and kamikaze bicyclists who they feel will undoubtedly flout all traffic laws if the paths are installed in Howard Beach.
Banrey sought to assuage those worries.
“Any time we implement a project like this, we work very closely with local precincts,” he noted. “Enforcement increases.”
Also featured on the civic’s jam-packed agenda was Melinda Katz who addressed area residents on Tuesday as a candidate for Queens district attorney, not their borough president.
“I believe I’m the right person with the level-head [needed] for this job,” she said. “There is not one area of this great borough that I don’t know. And I have taken on the powerful interests in every area of government.”