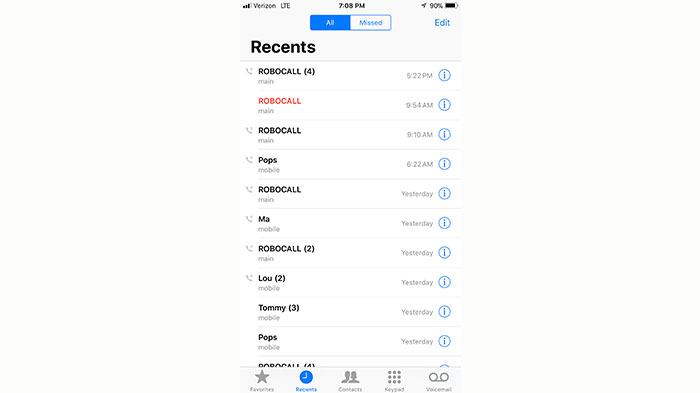 By Michael V. Cusenza
The State Senate recently approved legislation that would limit robocalls to state residents and requires telephone service providers to offer free call-mitigation technology to customers, one of the measure’s cosponsors, Sen. Joe Addabbo, Jr. (D-Howard Beach) announced Tuesday.
According to Addabbo, the bill requires telephone service providers to supply consumers with technology that can identify and block unwanted calls. Although some providers do offer call-mitigation technology for free, others charge for the services, or haven’t made it widely available or easy to use, especially for Voice-over-Internet-Protocol landline phones. The proposed law would require this technology be made available, free of charge to any consumer who requests it.
“I hear from my constituents all the time about how fed up they are with the relentless robocalls,” the senator said. “I think we all can agree that it is incredibly annoying to get unwanted calls from people you don’t know and don’t want to talk to—not to mention the growing prevalence of scam artists who prey on the elderly or other vulnerable individuals.”
According to YouMail, a company that tracks robocalls, 25 billion robocalls have been placed nationwide in the first five months of 2019. Unwanted robocalls have disproportionately targeted New Yorkers who have logged 1.5 billion of them so far this year—290,300,000 in April alone. Weak oversight and the abundance of new technology have led to the sharp rise in robocalls, according to Addabbo. Landlines have very limited protections, which leads to a disproportionate impact on the elderly. Technologically, the arrival of VoIP dialing has allowed companies to discharge millions of calls for pennies; and spoofing, or fraudulently displaying a fake a telephone number on the recipient’s caller ID, makes consumers even more susceptible to unwanted calls and scams. This technology has undermined the effectiveness of the federal government’s Do Not Call Registry, which previously protected New Yorkers from intrusive telemarketers, the senator noted.
“Robocalls are not only irritating but they undermine both privacy and safety, use up low-income consumers’ limited minutes, and subject consumers to harassing telemarketing and debt-collecting tactics,” Addabbo added. “This legislation will restore control to the consumer and eliminate the daily barrage of unwanted calls.”
The measure has been referred to the Assembly Committee on Corporations, Authorities and Commissions.
Last month, Senate Minority Leader Chuck Schumer (D-N.Y.) announced that the Senate had passed the TRACED Act: “landmark legislation” that would give federal agencies the tools and authority to trace, prosecute and enforce fines against robocall scammers, as well as establish new requirements related to call-authentication technology that could filter out robocalls before they reach the phones of unsuspecting targets.
“There’s very little more annoying to New Yorkers than being woken up in the dead of night by automated calls trying to scam them out of their hard-earned money,” Schumer fumed.
And on Thursday, members of the House of Representatives introduced their own bipartisan robocall bill. The Stopping Bad Robocalls Act amends the Communications Act of 1934 to expand prohibitions against autodialed calls to include the making of robocalls.