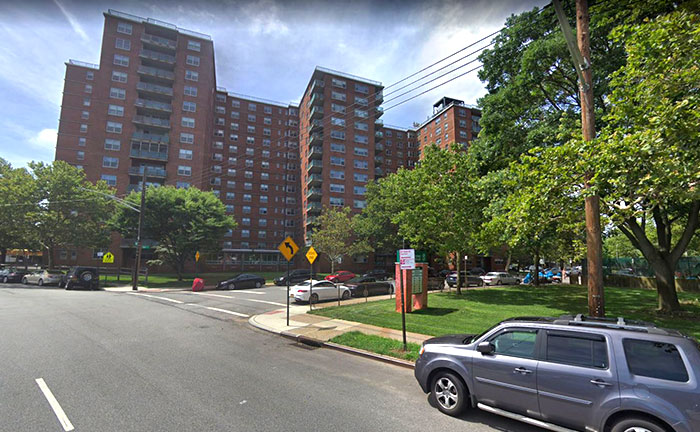 The victim was gunned down shortly after a baby shower at the Rochdale Village apartment complex in Springfield Gardens.

By Forum Staff
A jury has found a North Carolina man guilty of murder in the 2015 shooting death of his former friend, who was gunned down shortly after a baby shower at the Rochdale Village apartment complex in Springfield Gardens, Acting Queens District Attorney John M. Ryan announced on Thursday.
Following a nearly two-week trial, a jury convicted Brian White, 42, of second-degree murder and second-degree criminal possession of a weapon. Queens Supreme Court Justice Ushir Pandit-Durant, who presided at trial, set sentencing for July 15, at which time White faces up to 25 years to life prison, Ryan noted.
According to trial testimony, on June 28, 2015, at approximately 10 p.m., surveillance video footage captures White and his brother walking alongside one of the apartment buildings in the Rochdale Village complex. The men disappear from camera view and then moments later numerous people can be seen running from the area—a pathway where the victim, Robert Dejesus, was shot multiple times in the head and body. The 35-year-old victim was attending a baby shower for a relative in the apartment complex, Ryan said.
According to trial testimony, a witness who knew both the victim and the defendant observed the men argue before White pulled out a gun and shot the victim as he turned to run. DeJesus fell to the ground and the defendant then shot him several more times.
Continuing, according to trial records, at approximately 10 p.m., 10 minutes after the shooting, White is seen re-entering one of the buildings in the complex and taking the elevator to a floor where he rented a room. Surveillance cameras also show the defendant emerging from the apartment where he was staying wearing a different set of clothes as he exits the building. A short time after the shooting, the defendant left New York and relocated to Raleigh, N.C.
Acting DA Ryan added that, according to trial testimony, White was seeking revenge for an incident in 2013 in which the victim had stabbed White in the leg. After the stabbing, White had told several mutual friends that he was going to kill DeJesus.
Furthermore, said the district dttorney, according to trial testimony, shortly after the shooting, police identified White as a person of interest, but it wasn’t until October 2015 when an anonymous tip led to his arrest.
“A joyous occasion turned into violence and bloodshed when the defendant shot and killed his former friend after a baby shower in Queens,” Ryan added. “The defendant and the victim had a violent altercation 18 months before the deadly encounter in June of 2015. This kind of senseless gun violence will not be tolerated in our neighborhoods. The defendant has now been tried again and convicted and faces spending the rest of his life behind bars.”