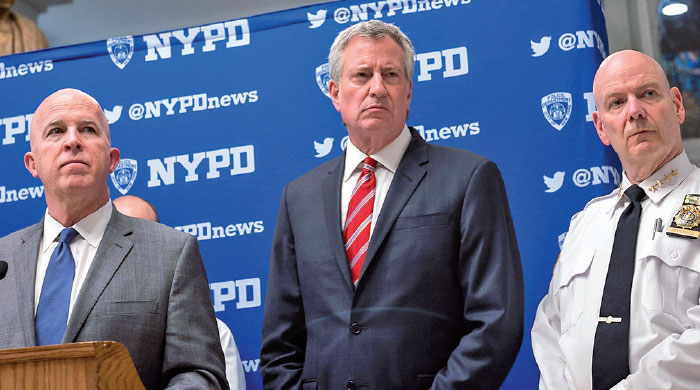 For any New Yorker, the pictures and videos involving City cops were striking. Many had even gone viral shortly after they were posted.
This was Dec. 27, 2014. Not July 2019.
During the gut-wrenching Glendale funeral for hero NYPD Det. Rafael Ramos, dozens of fellow Finest turned their backs to Mayor Bill de Blasio as soon as he uttered the first syllable of his eulogy.
We said it back then and we’ll say it again now: Those cops deserve a standing ovation. Hizzoner deserves their backs.
Because he’s never had theirs.
In yet another stunning example of self-serving inaction, our fearless leader has shown that he’s more concerned with his spot on stage at the Democratic presidential debates in Detroit than he is with the safety of the men and women who have handed him—month after month, year after year—nothing but record lows in crime during his tenure in Gracie Mansion.
While police officers are being pelted with water and buckets—and demonstrating nearly saint-level grace and restraint in the aftermath—de Blasio is more interested in how he can use the NYPD’s recent achievements to his advantage nationally.
“What if the buckets of water were not filled with water? What if it was harmful liquid, like bleach or acid?” a concerned Assemblyman Mike Miller (D-Woodhaven) rightly observed.
“This is what happens with knee-jerk disrespect for police,” former Mayor Rudy Giuliani tweeted, laying blame for the brazen attacks at the feet of de Blasio.
“Our anti-cop lawmakers have gotten their wish: the NYPD is now frozen,” Police Benevolent Association President Pat Lynch said. “It’s not the fault of these police officers. It’s the end result of the torrent of bad policies and anti-police rhetoric that has been streaming out of City Hall and Albany for years now. We are approaching the point of no return. Disorder controls the streets, and our elected leaders refuse to allow us to take them back. As police officers, we need to draw a line. In situations like this, we need to take action to protect ourselves and the public. The politicians may not care about the dangerous levels of chaos in our neighborhoods, but police officers and decent New Yorkers should not be forced to suffer.”
Mr. Mayor, get your own house in order. Take care of the people who have been taking care of you before concerning yourself with a race to which you were never invited.
“Mayor de Blasio needs to allow police officers to do their jobs,” Miller added. “Why did these police officers feel inclined to walk away from the individuals who were harassing and taunting them and not make an arrest? The mayor needs to stand with police officers and make them feel empowered to do the job that they are trained to do- to protect and enforce the law.
Take the handcuffs off the police officers and let them do their jobs.”
Amen.