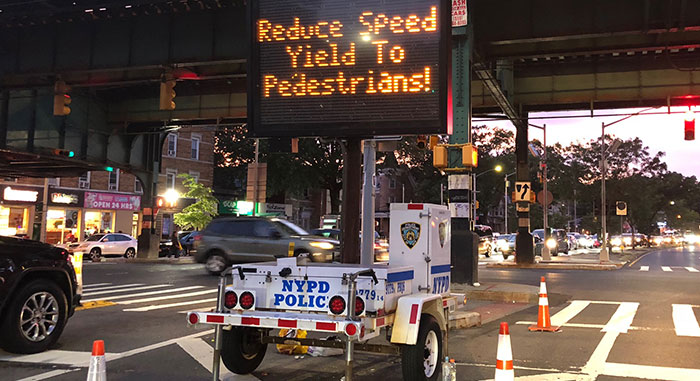 By Michael V. Cusenza
Concerned community members held a demonstration late Friday night along a particularly perilous stretch of Woodhaven Boulevard, the site of a recent fatal hit-and-run accident.
Led by the Woodhaven Cultural and Historical Society, area residents rallied at Woodhaven Boulevard and 91st Avenue, waiting until the traffic signal glared red before stepping out onto the asphalt so waiting motorists could clearly see the signs they were toting: “Slow down on Woodhaven Blvd” and “Man killed here.”
Richmond Hill resident Sivananaintha “Shiva” Perumal, 54, was struck on Thursday, July 25, in a hit-and-run on the southbound side of the boulevard near 91st Avenue. Perumal, who worked at a Howard Beach Dunkin’ Donuts shop, was hit around 5 a.m.; the driver then dragged the man’s dismembered body nearly 300 feet before peeling away. Perumal was pronounced dead at the scene.
David Garcia, 26, of Woodhaven, was arrested on Aug. 6 and arraigned on a slew of charges, including felonies second-degree vehicular manslaughter, leaving the scene of an accident, and criminally negligent homicide. Bail was set at $50,000 cash/$100,000 bond. Garcia posted bail and was released on Friday, Aug. 9, from City Department of Correction custody at Rikers Island, according to DOC records. He has been ordered to return to court on Sept. 23.
Perumal’s death came roughly 30 hours after another violent traffic accident on the treacherous thoroughfare. On Wednesday, July 24, around 1 a.m., a cyclist was struck by an SUV near the intersection of Woodhaven Boulevard and Jamaica Avenue, police said. The motorist remained at the scene while the victim was rushed to Jamaica Hospital Medical Center, where he was listed in critical condition. No charges were filed in the incident.
“Clearly more needs to be done to protect cyclists and pedestrians at busy intersections. @NYC_DOT should start by planning and installing safer bike lanes. The current network (or lack thereof) in South Queens is a big part of the problem,” City Councilman Eric Ulrich (R-Ozone Park) tweeted after noting that the SUV-cyclist accident occurred in his council district.
“We stand in solidarity with residents near Woodhaven Blvd and 91st Avenue in their silent protest against speeding,” Councilman Bob Holden (D-Middle Village) tweeted late Friday night. “This is the location where Sivananaintha Perumal was hit and run by someone driving at 92 mph. People need to slow down!”
A crowdsourcing account has been established to help Perumal’s wife and three children. Visit gofundme.com/f/hit-amp-run-accident-shiva-coffeeshop-worker-died for more information.