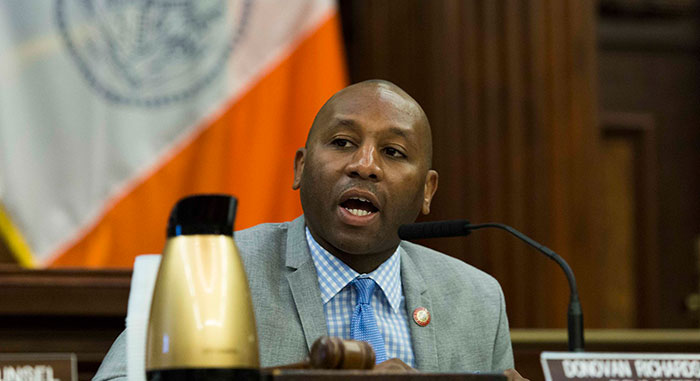 Councilman Donovan Richards is the chairman of the Public Safety Committee.

By Michael V. Cusenza
City Council colleagues recently leapt to the defense of Councilmember Donovan Richards (D-Laurelton) after the head of the city’s largest police union fired off a caustic mailer to Richards’s constituents, blasting the chairman of the Council Committee on Public Safety for “bashing cops.”
“Do you know Donovan Richards? You should, because he is your City Council Member and he is failing you. He cares more about running for higher office than he does about regular folks in Southeast Queens,” longtime Police Benevolent Association President Patrick Lynch wrote in the missive dated July 29. “You deserve better representation, and you should call his office to demand it.”
While the specific reason for the message is unclear, Richards and many of his fellow elected officials have said that they believe it is in response to Richards consistently calling for the firing of former NYPD Officer Daniel Pantaleo, the cop who applied the banned chokehold that killed Eric Garner five years ago on Staten Island. Pantaleo was fired on Monday by Police Commissioner Jim O’Neill.
“As cops, we are battling an uptick in shootings across the city. Last week, two little kids were hit by stray bullets, and 12 people were shot at a block party this past weekend. Donovan is chairman of the Public Safety Committee. Have you heard from him about these shootings? What has he been doing?” Lynch wrote in the Richards mailer. “Not helping us get guns off our streets, that’s for sure. Instead, he’s been on the steps of City Hall, bashing cops so that he can get his name in The New York Times. He’s not speaking for you. He’s not even speaking TO you — he’s speaking to the transplants in Astoria and Long Island City. He wants their votes, but he takes yours for granted.”
Richards’s council colleagues took to Twitter to rally around him.
“I know @DRichards13 well. I don’t always agree with him on every issue but when it comes to public safety and police matters he’s tough, but fair. I’m disappointed to see @NYCPBA waste union dues attacking him,” Councilman Eric Ulrich (R-Ozone Park) said.
“Donovan is a leader who leads with his heart. He’s spoken movingly about being stopped and frisked and growing up as a young black man in NYC. When a detective was tragically killed earlier this year—when I went to the hospital, Donovan was already there to be with the NYPD,” Council Speaker Corey Johnson posted. “He has spoken up countless times about gun violence in the city. He pushed to ensure that former cadets would be treated fairly with their pension & benefits. And yes he [has] spoken up clearly & forcefully about why Pantaleo should be fired. I’m proud of my friend Donovan.”
Still, Lynch, in his penned diatribe, urged Richards’s constituents to call him at his district offices in Laurelton and Far Rockaway.
“You don’t need to ask him to support the police—it’s clear that he doesn’t,” Lynch concluded. “Just ask him what he is doing about the problems that affect you.”