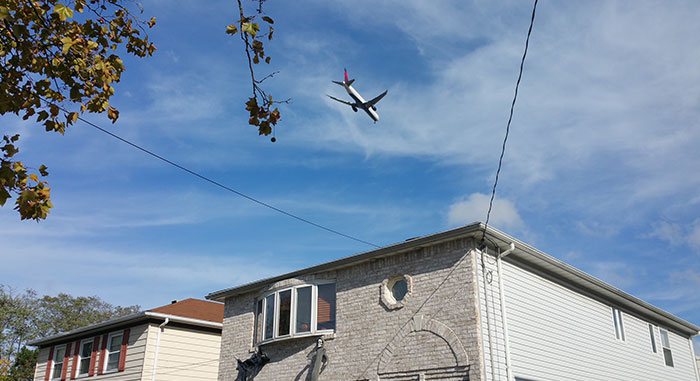 Part of NextGen’s implementation involves new flight routes that have caused communities in Queens, the Bronx, and on Long Island to experience increased levels of aircraft noise.

By Forum Staff
Three New York elected officials recently reached out to the Federal Aviation Administration, urging the agency to increase transparency of public meetings held by the NextGen Advisory Committee.
According to Senate Minority Leader Chuck Schumer, U.S. Sen. Kirsten Gillibrand (D-N.Y.), and Rep. Grace Meng (D-Flushing), the committee provides the FAA with advice and recommendations on ways to enhance and maximize the Next Generation Air Transportation System, which is the FAA-led modernization of the nation’s air transit operation that seeks to improve the safety, efficiency, capacity, predictability, and resiliency of U.S. aviation. However, part of NextGen’s implementation involves new flight routes that have caused communities in Queens, the Bronx, and on Long Island to experience increased levels of aircraft noise.
In a joint letter to Acting FAA Administrator Dan Elwell, the legislators called on the agency to provide the public with improved notification of NextGen Advisory Committee meetings, more advanced notice of when these meetings are scheduled to take place, and to livestream each confab.
“NextGen modernization of our National Airspace System impacts not only airlines, airports, and air traffic control, but the flying public and people living near airports. In this regard, the NextGen Advisory Committee meetings are an opportunity for the public to weigh in on the technologies, operations, and issues regarding NextGen implementation,” the lawmakers wrote. “Unfortunately, we are concerned about the following limitations and undue barriers our constituents face in their continued engagement with NAC”:
• According to FAA internal guidelines, public notification of upcoming NAC meetings are only required to be published 15 days before a meeting. This leaves interested members of the public little time to make arrangements to attend, Schumer, Gillibrand, and Meng said. For example, the next meeting of the NAC will be held on July 30, 2019 in McLean, Va. This gives members of the public in New York only 15 days to purchase a flight or train ticket for travel—costs for which can rise prohibitively in the days leading up to the travel day—and to book accommodations if necessary.
• Announcements are published in the Federal Register, which can be difficult for members of the public to navigate when hunting for a specific meeting, and identical announcements are not made on the more user-friendly FAA website until several days afterwards.
• And those who are unable to attend in person—due to cost, time constraints, or physical inability to travel—the opportunities for public input are limited at this time, as the FAA does not videotape or livestream these meetings, the pols noted.
Schumer, Gillibrand, and Meng requested that the FAA revise its guidelines and: ensure that when announcements are made in the Federal Register of the meeting time, they are simultaneously published in a more user-friendly location, such as FAA’s website; extend the current 15 days of advanced Notice of Public Meetings with a longer lead time; and make the NAC meetings viewable and accessible via livestream.
“The federal officials determining aircraft route changes have a responsibility to listen directly to New Yorkers to ensure that any new routes carefully consider the potential effects on their quality of life,” Gillibrand said.