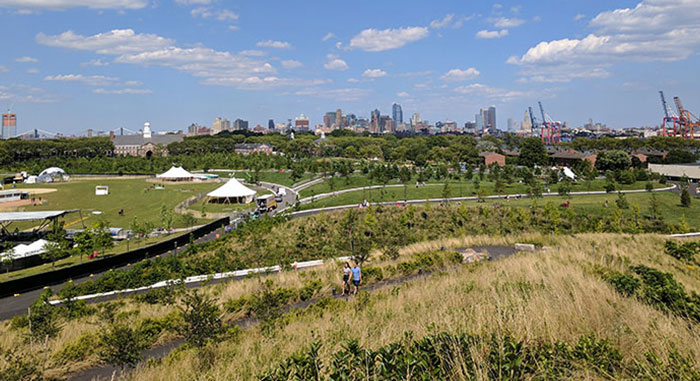 Former DCP Commissioner Amanda Burden once called the water the city’s “connective tissue between our boroughs and, in effect, our Sixth Borough.”

By Michael V. Cusenza
New Yorkers of all ages with a keen interest in playing a role in imagining how to make one of the city’s defining resources—its 520 miles of waterfront—work better gathered on Governors Island Saturday for the Waterfront Planning Camp.
Hosted by the Trust for Governors Island, the free event featured interactive endeavors where participants shared ideas for the post-Superstorm Sandy waterfront. The camp offered a gamut of information and activities from the serious (go bags, preparedness, and flood insurance) to the sublime (boat tours, ice cream).
Queens Borough President Melinda Katz said that such communal opportunities are especially important to The World’s Borough and the 2.4 million people that call it home.
“Surrounded by water on three sides, Queens and its coastal communities have a significant stake in any plan to make our city’s waterfront more accessible and resilient over the next decade,” Katz said. “It is vital that residents from the Rockaways to Long Island City to Bayside and beyond participate in the process of creating a new Comprehensive Waterfront Plan, as we work to ensure our many miles of coastline continue to be hubs of recreation, resiliency, industry and economic opportunity for our families.”
According to the Department of City Planning, the Comprehensive Waterfront Plan, mandated by law to be updated every 10 years, will be developed with public input and released by the end of next year. It aims to make New York City’s 520 miles of waterfront more accessible, active and resilient, DCP officials said.
The plan will be the third such iteration and will provide a vision for the city’s waterfront for the next decade and beyond. Vision2020: New York City Comprehensive Waterfront Plan, released in early 2011, set the stage for expanded use of the waterfront for parks, housing and economic development, and of city waterways for transportation, recreation, and natural habitats. Vision 2020 sought to reconnect New Yorkers and visitors to the water and reclaim NYC’s standing as a premier waterfront city.
“Our water is the connective tissue between our boroughs and is, in effect, our Sixth Borough,” then-DCP Commissioner Amanda Burden said in March 2011. “We are now planning for our waterfront and waterways with the same intensity and passion that we have traditionally planned for our land.”
Events such as Saturday’s planning camp are part of the first phase to update the next Comprehensive Waterfront Plan, DCP noted. In the fall, the agency will host a series of “Listening Sessions” with local organizations and launch various engagement strategies. DCP has pledged to gather what its officials have heard at these sessions and develop the structure and policy framework for the plan. The department has also promised to host a series of workshops in early 2020 to discuss the proposals with the public before it writes and releases the plan at the end of 2020.
“New Yorkers love their waterfront and we’re using it more than ever. To make this precious resource even more enjoyable, accessible and resilient, we’re going to the experts—New Yorkers themselves!” said DCP Director Marisa Lago. “We encourage your involvement to inform a plan for the city’s waterfront for decades to come.”
For more information, visit nyc.gov/waterfrontplan.