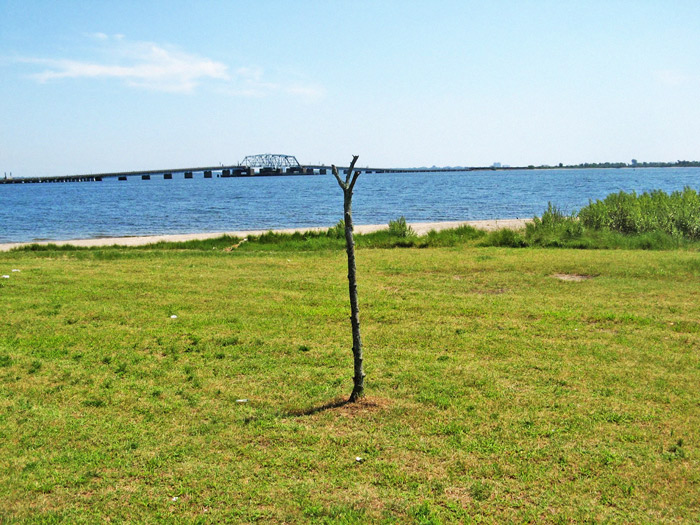 Just a couple of months ago, in this space, we wrote—yet again—about the pervasive and perpetually dangerous problem of cars idling at all hours of the day and night along a stretch of the eastbound Nassau Expressway between Howard Beach and John F. Kennedy International Airport.

Here’s another persistent predicament—an eyesore that has been around just as long as the idling autos.

Here’s how one anonymous—and obviously exasperated—resident put it in an impassioned missive to the Queens Crap blog.

“It was three years ago when I sent you an expose on Frank Charles Park and the lousy jog the National Park Service does there. I also wrote to NPS and the local papers and contacted the local politicians about the conditions there. Well nothing has changed, we see the same dead trees and dead branches directly above where people walk and sit. The bathroom only takes one man and one woman at a time in a park that has a playground, tennis courts, ball fields, picnic tables and a beach. The beach accumulates trash everyday from the tides and from some beach goers and needs to be cleaned on a regular basis. The beach has serious erosion and picnic tables there are unusable.

“Why have these conditions been allowed to continue for so long? The NPS says they are underfunded and understaffed. The politicians say they know there are problems and will see what they can do. Why can’t obvious safety problems like dead trees be at least addressed? If someone is killed or injured and sues for millions of dollars where is the money going to come from us the people who pay taxes. Howard Beach is a nice community and I’m sure people pay plenty of taxes and this is New York the biggest city in the USA so why are we not getting treated better by our government?

“The National Park Service has shown they cannot operate a community park at the standards the NYC Parks can and should turn over control of the park to the city.NYC Parks are usually well maintained and they are have more experience with operating a park and have created many beautiful parks within the city.

“Hope it doesn’t take someone dying before something is done but sadly that seems to be.”

Kudos to the great people of the Charles Park Conservancy, and the community groups that truly care, like the Howard Beach Lindenwood Civic Association, that make it their business to tend to their beloved green space several times a year.

The National Park Service could learn a thing or two from them.