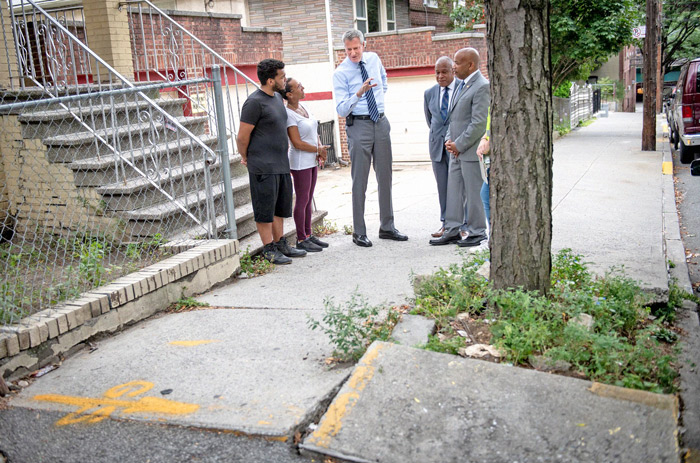 According to the City, DOT will review the 50,000 existing Notices of Violation to determine which were caused exclusively by street trees and cancel the lien for any that meets the criteria.

The City will also ramp up sidewalk repairs under the Trees & Sidewalks program to address 5,500 priority sites over the next three years, de Blasio added.

According to the administration, the City will stop imposing liens on one-, two- and three-family properties that have sidewalk damage caused solely by City trees. The Department of Transportation and the Parks Department will still inspect for dangerous sidewalk conditions, but the City, not the homeowner, will be responsible for fixing them if they are exclusively tree related, Hizzoner noted.

“We’re not just fixing broken sidewalks—we’re fixing a broken system,” de Blasio said. “We tripled funding for tree-related sidewalk repair, but homeowners were still on the hook for problems they didn’t create. As a homeowner, I know how frustrating that is. Now, if a street tree causes damage, we’re taking care of it.”

According to the City, DOT will review the 50,000 existing Notices of Violation to determine which were caused exclusively by street trees and cancel the lien for any that meets the criteria. If the homeowner of the qualifying property is selling or refinancing their home, the City will expedite the re- evaluation.

“This has been a huge quality of life concern for my constituents who have invested their savings in purchasing a home, only to be hit with this liability through no fault of their own,” Heastie said.

According to the administration, there are approximately 5,500 high-priority damaged sites that will be repaired by the end of Fiscal Year 2022. After that, the worst sidewalk conditions caused by street trees will be repaired within 12 months, City officials said.

“Street Trees are an important part of our urban landscape but have caused homeowners many headaches over the years due to sidewalk damage. Ending the imposition of liens and violations to homeowners for damage caused by City trees is a commonsense policy that will improve the quality of life for many people in my district and across the entire city,” said Assemblyman David Weprin (D-Richmond Hill).

Visit nycgovparks.org/services/forestry/request/submit?tab=trees-and-sidewalks to request an inspection through the Trees & Sidewalks program.

“The announcement that the city will stop issuing violations for city tree damage is great news for homeowners across New York City,” said City Councilwoman Adrienne Adams (D-Jamaica). “Over the past few years I have heard from many Queens homeowners burdened with costly violations and repairs. Sidewalk damage can be incredibly dangerous and it is great to see that repairs will be prioritized by the City.”

Chairman of the Council Committee on Parks and Recreation, Peter Koo (D-Flushing), added, “In the past, tree damage on sidewalks has unfairly saddled homeowners with the responsibility for trees they don’t own, and by righting this long-standing wrong, the City looks to finally provide some semblance of financial relief to property owners throughout the city.”