These orange signs, plastered on poles along the boulevard, announced the start of the resurfacing project.

Crews started milling the first section—Cross Bay Boulevard between 156th and 165th avenues in Howard Beach—Tuesday night. Work on the second section, which runs from the Joseph P.  Addabbo Memorial Bridge to West 5th Road in Broad Channel, will begin the week of Sept. 23, according to DOT officials.

Both milled sections of roadway will then be repaved and include fresh, high-visibility crosswalks and other markings, the agency noted.

“This is much needed and greatly appreciated!” the Howard Beach Lindenwood Civic Association said in a Monday afternoon Facebook post. 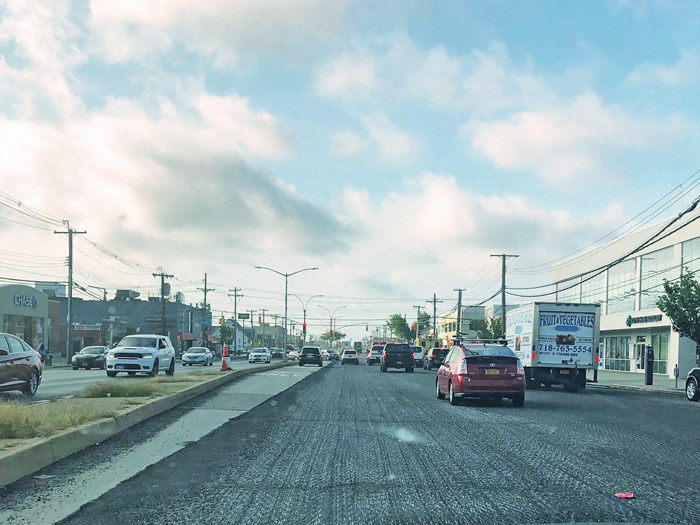 The state-of-good-repair project is made possible with $2.125 million in Reso-A funds secured last year by City Councilman Eric Ulrich (R-Ozone Park), according to the administration. It also marks the first time these sections of the thoroughfare have been resurfaced in more than 20 years. Resurfacing of the roadway is expected to be completed in October, weather permitting.

“Cross Bay Boulevard is the busiest corridor in my district,” Ulrich said. “Thousands of cars, buses and trucks travel on this road every day. The wear and tear over the years is visible, and that is precisely why I allocated this funding. We are making a critical investment in the physical infrastructure of our community and it simply would not have happened without the help, support and cooperation of the DOT commissioner and her dedicated staff. I look forward to seeing the work once it is completed in October. I think everyone will agree it is taxpayer money well spent.”

DOT Queens Borough Commissioner Nicole Garcia added that the department is “grateful for the significant funding from Council Member Ulrich to allow the agency to go above and beyond to resurface this critical north-south corridor in Queens. DOT appreciates the patience of local residents, businesses and others who use this roadway as crews perform milling and paving work over the next several weeks. We look forward to the finished product of a smoother, safer Cross Bay Boulevard from Howard Beach into Broad Channel.”