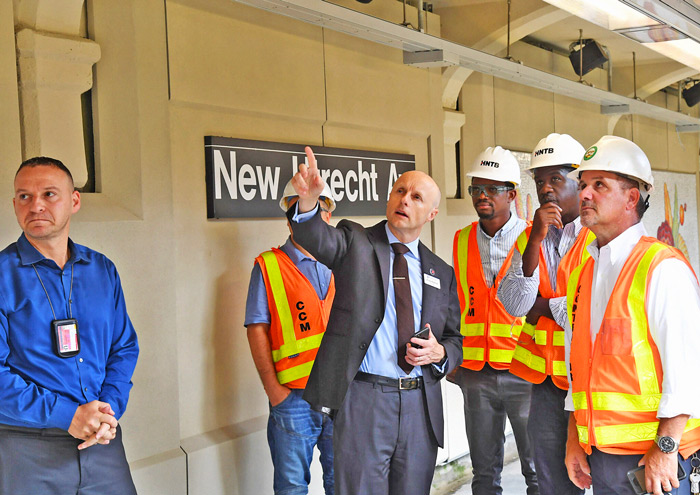 “These proposed investments in our subways and buses have delivered beyond my wildest expectations,” MTA New York City Transit President Andy Byford said of the 2020-2024 Capital Plan.

The Metropolitan Transportation Authority on Monday released the 2020-2024 Capital Plan that proposes investing $51.5 billion into the region’s subways, buses and railroads over the next five years to, as the embattled transit agency characterized, “institutionalize and build on the progress of the Subway Action Plan and create a faster, more accessible, and more reliable public transportation system.”

The proposed level of investment is the highest in the MTA’s history, increasing spending on infrastructure by 70 percent over current levels, which were already the highest ever. The program plans to invest more than $40 billion in New York City Transit’s subways and buses alone, as well as major investment in commuter-rail systems (Long Island Railroad and Metro-North).

Station Improvements ($4.1 billion): The MTA would perform renewal work addressing components in need of critical repair at about 175 stations, including replacement of 78 elevators and 65 escalators.

Replacement and Additional Buses ($2.5 billion): The MTA would replace more than 2,200 of the oldest buses, including with electric, hybrid and compressed natural gas buses, and expand the fleet size by more than 175 buses. The MTA proposes investing $1.1 billion to modify depots for electric bus operations, and to purchase 500 electric buses, including replacement buses and some additional buses. The program will enable the MTA to acquire only electric buses beginning in 2029.

LIRR ($5.7 billion): The proposed capital plan makes the investments necessary to enable a transformation of the LIRR by the planned December 2022 opening of East Side Access and Main Line Expansion. East Side Access will allow more than 160,000 daily customers to travel to Grand Central Terminal, saving commuters up to 40 minutes per day. Main Line Expansion will add a third track on 10 miles of the Main Line corridor, used by 40 percent of LIRR customers. These projects, along with Jamaica Capacity Improvements, will enable a 60-percent increase in reverse commute and a 50-percent increase in peak service between Manhattan and Long Island, according to the MTA.

“These proposed investments in our subways and buses have delivered beyond my wildest expectations,” said MTA New York City Transit President Andy Byford. “The system has been stabilized and this capital plan offers us an extraordinary opportunity to now modernize it and provide world-class transit options to New Yorkers in an unprecedented time frame, and as we move forward we will rise to that challenge on behalf of our customers.”

So how will the beleaguered agency pay for such an aggressive plan? According to the MTA, the single largest source of funds for the plan—$25 billion—comes from bonds backed by new revenue streams authorized in this year’s State budget, including $15 billion from congestion-pricing tolling that was passed by the Legislature and signed into law in April by Gov. Andrew Cuomo as part of the State’s FY 2020 budget. The MTA indicated that it anticipates receiving $10.68 billion from federal funding programs. Another $10 billion will come from bonds backed by newly established revenue sources dedicated to public transportation: a progressive tax on high-end real estate sales and the elimination of the internet tax advantage. The State under Cuomo has pledged $3 billion, subject to approval by the Legislature; and the City under Mayor Bill de Blasio has been asked to pledge an equal amount. The remaining $9.8 billion will come from the MTA in the form of pay-as-you-go capital contributions and bonds backed by longstanding dedicated taxes, fares, and revenues from existing tolling.

“The proposed capital program will be truly transformational—more trains, more buses, more service, more accessibility, and more reliability,” MTA Chief Development Officer Janno Lieber gushed. “We now have the opportunity to quickly start building the system we need for the future, and through the use of the Design-Build approach it will enable us to deliver those projects faster, better, and cheaper.”

MTA Chairman & CEO Patrick Foye called the proposed 2020-2024 Capital Program “the most ambitious capital plan in the agency’s history… This plan expands service, increases reliability, speeds up the system, and delivers the world’s largest-ever investment in accessibility, for both NYC Transit and the MTA’s commuter railroads, and at the end of this five-year period, New Yorkers will see a revitalized and modern system for the 21st Century and beyond.”