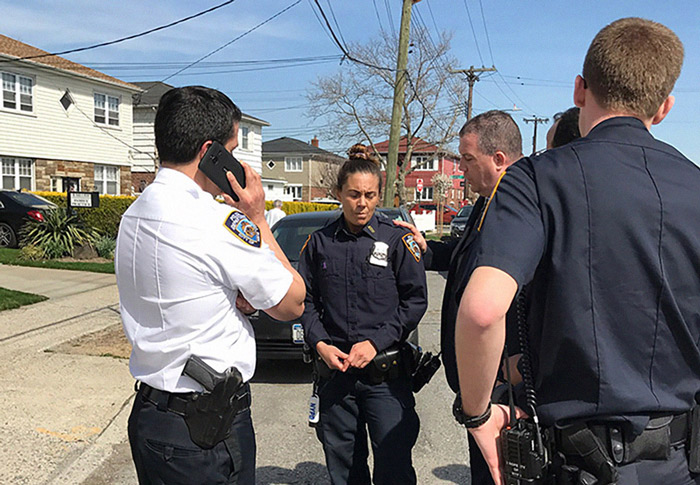 The former NYPD cop accused of scheming to employ a hitman to murder her estranged husband and the minor daughter of her current boyfriend has been denied bail, according to federal court records.

In a six-page decision, Judge Sandra Feuerstein wrote that she finds that Valerie Cincinelli, 35, “poses a danger to the safety of the allegedly intended victims and the community, particularly in light of the serious risk that [Cincinelli] would attempt to obstruct justice, as evidenced by her alleged conduct in destroying and/or attempting to destroy evidence prior to her arrest and her disobedience of court directives while in custody. Upon consideration of the factors…particularly the nature and seriousness of the crimes charged; the lengthy term of incarceration the defendant faces if convicted; the strength of the government’s evidence; and the defendant’s personal characteristics and history, particularly her lack of impulse control and remorse and her defensiveness, the Court finds that there is no condition or combination of conditions of release that will reasonably assure the safety of the allegedly intended victims and the community.”

Cincinelli, who worked out of the 106th Precinct, was arraigned back in May on an indictment charging her with two counts of murder for hire and one count of obstruction of justice.

According to the indictment, an FBI investigation revealed that earlier this year, Cincinelli demanded that her boyfriend, Howard Beach resident John DiRubba, hire a hitman to murder Cincinelli’s estranged husband, Isaiah Carvalho, Jr., and DiRubba’s 14-year-old daughter, who resides in New Jersey.

DiRubba, 54, turned to the feds for help. Between February 2019 and the present, according to authorities, Cincinelli and DiRubba discussed the murder-for-hire plot both in person, as well as in communications over cell phones; some of said conversations were consensually recorded at the direction of FBI agents. During those conversations, Cincinelli allegedly made it known in no uncertain terms that she wanted Carvalho and the kid dead.

DiRubba told Cincinelli that he knew someone who would kill both of them for $7,000. According to prosecutors, on or about Feb. 18, Cincinelli made a cash withdrawal of $7,000 from a TD Bank branch in Wantagh, L.I., to pay “the hitman.” Bank records confirm the cash withdrawal. Then, Cincinelli gave $7,000 in cash DiRubba to give to the hitman in payment for the murders.

According to federal officials, at the direction of FBI agents, Cincinelli was notified in person at her home that Carvalho had been murdered. DiRubba was with Cincinelli at the time of the notification, outfitted with a recording device at the direction of law enforcement. Almost immediately after the Suffolk County detective left Oceanside, Cincinelli began to discussed her alibi—specifically, what she would tell the police if she were to be questioned about Carvalho’s death.

Then, around 35 minutes later, an FBI agent, posing as the hitman, sent a text message to DiRubba, which included a photograph of Carvalho appearing dead in his car, and a demand for an additional $3,000 to kill DiRubba’s daughter. In response, Cincinelli instructed her boyfriend to delete the text messages and photographs, citing her fear that law enforcement could subpoena the phone.

“The audio and video recordings of [Cincinelli] discussing the murders are extremely strong evidence of her intent to have them killed,” federal prosecutors said in May.