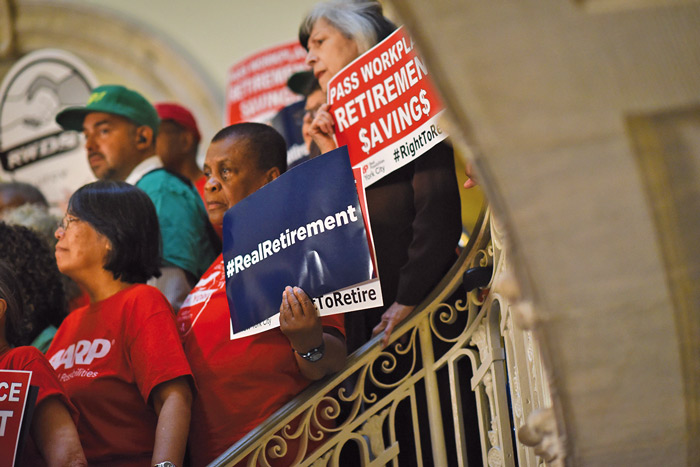 According to the City, about 1.5 million private-sector employees in the five boroughs have no access to a retirement savings program through their employer.

With his starry-eyed 2020 presidential campaign—mercilessly lampooned on both sides of the aisle since its awkward opening salvo in the Trump Tower lobby—now in the rearview mirror, Mayor Bill de Blasio has returned his attention to his constituents.

This week, Hizzoner heralded a proposal that would make Gotham the first city in the nation to create a universal retirement savings program.

Currently, about 1.5 million private-sector employees in the five boroughs have no access to a retirement savings program through their employer, according to the administration.

“Let’s get clear about this concept: If someone works all their life, works hard, they should not need to have a second job or a third job. If someone works hard, they should not have to wonder if they could possibly survive in retirement, and yet that is the reality today here in New York City [and] all over this country,” the mayor added. “I talked a lot about, over the last months, putting working people first. Here’s an example—giving people retirement security means we actually respect the people who do the work.”

The Retirement Security for All proposal is based on two pieces of legislation introduced last year by Councilmen I. Daneek Miller (D-St. Albans) and Ben Kallos (D-Manhattan). Miller’s measure would establish an individual retirement account program for private-sector workers at businesses with 10 or more employees located in the Big Apple that do not already offer retirement savings plans. Enrollment in the program is automatic, but employees may opt out. Contributions are handled through payroll deductions and set at a default rate, but employees may change their contribution rate. Savings accounts would be comprised of individual employees’ savings only; neither employers nor the City would contribute to individual accounts. Covered employers would be required to distribute program information to employees. The bill also sets forth a complaint procedure and civil penalties for violations, Miller noted.

Kallos’s bill would establish a retirement savings board to facilitate the implementation of an IRA for private-sector workers at businesses with 10 or more employees located in NYC that do not already offer retirement savings plans. The board would consist of three members—all appointed by the mayor. The powers of the board include directing the investment of funds contributed to the IRAs, entering into contracts with financial institutions and administrators, minimizing fees and costs associated with the administration of the program, and conducting education and outreach to employers and employees. The board would be required to submit to the mayor, the Council Speaker, the Comptroller, and the Public Advocate an annual report of its activities and actions.

Both bills are currently wending their way through the council.