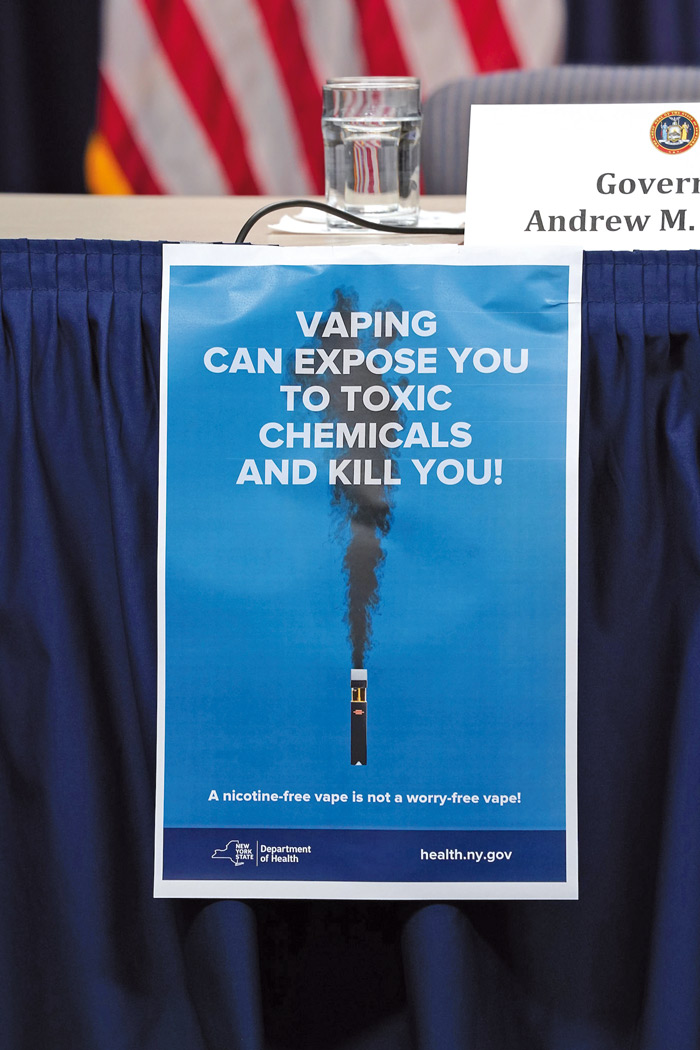 According to the Centers for Disease Control and Prevention, New York had 81 confirmed cases of vaping-associated illnesses last week—up from 64 the previous week.

Empire State officials Friday re-issued a warning to New Yorkers to continue to refrain from using e-cigarette or vaping products as the number of vaping-associated illnesses “sharply increases” both in NY and across the country.

According to the administration, most patients who have gotten sick have reported a history of using e-cigarette products containing tetrahydrocannabinol, or THC, the primary psychoactive constituent of cannabis. Many patients have reported using THC and nicotine, and some have reported the use of e-cigarette products containing only nicotine. According to the CDC, 16 percent of its case patients are under the age of 18. In New York, 17 percent of the 81 reported cases feature teenagers, and 56 percent are under the age of 25.

Following a vote last week on emergency regulations by the Public Health and Health Planning Council, New York became the first state in the nation to ban flavored e-cigs and nicotine e-liquids. The ban currently excludes tobacco and menthol flavors; Zucker is evaluating a ban on menthol and will offer a recommendation soon. As part of the Family Smoking and Tobacco Prevention Act of 2009, Congress banned the sale of cigarettes with flavors other than menthol and tobacco.

Cuomo has characterized flavoring as a key youth marketing strategy of the vaping/aerosol industry just as it is in the cigarette, cigar, and smokeless tobacco markets. Electronic-cigarette marketing highlights flavors such as mint chocolate, bubblegum and cherry cola, and creates “a deceptive belief that they are not harmful to users.” In a 2017 survey of 15- to 17-year-old New York residents currently using e-vapor products, 19 percent of the adolescents said that flavors were the reason that they first tried an e-cigarette and 27 percent said flavors were the reason for maintaining use. Studies also show nearly 78 percent of high school students and 75 percent of middle school students report being exposed to pro-tobacco marketing in 2016.

Legislation will be advanced next session to prevent “deceptive and misleading advertisements” to target New York youth, Cuomo recently pledged.

“Manufacturers of fruit and candy-flavored e-cigarettes are intentionally and recklessly targeting young people, and we’re taking action to put an end to it. At the same time, unscrupulous stores are knowingly selling vaping products to underage youth—those retailers are now on notice that we are ramping up enforcement and they will be caught and prosecuted,” the governor added.

The Department of Health will begin enforcing the flavoring ban with retailers Friday, Oct. 4. Local health departments and DOH district offices, with State oversight, will handle enforcement. Retailers who violate the ban will face fines of up to $2,000 per violation, which is defined as each unit of flavored e-liquid or product containing e-liquid that is possessed, manufactured, sold or offered for sale in NY.