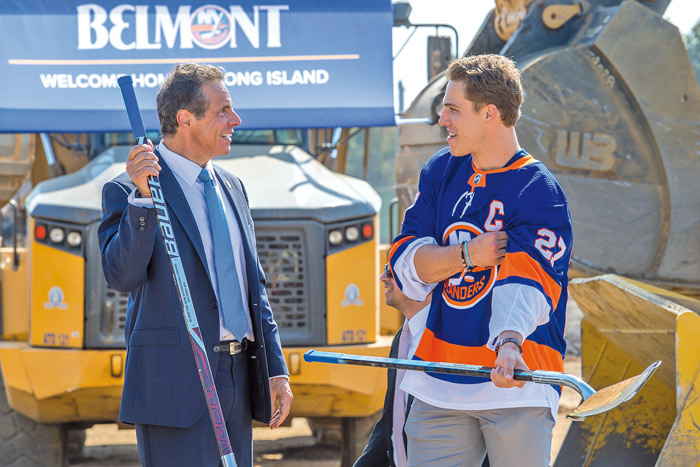 Gov. Cuomo and Isles captain Anders Lee are all smiles Monday after breaking ground on the new Belmont Park arena.

“I am an old Queens boy and for many years I would go up and down the Cross Island Parkway. You look at this site and you would say, ‘Why doesn’t someone do something with that site?’ Four hundred and forty acres, all sorts of potential just sitting there and it sat widely unused for a long, long time,” Cuomo said. “Well, today is a different day my friends.”

Announced in December 2017, the Belmont Redevelopment Project will turn 43 acres of underutilized parking lots at Belmont Park into “a premier sports and hospitality destination,” according to the Empire State Development Corporation, including: a new 19,000-seat arena for the Islanders and other events; a 250-key hotel; a state-of-the-art retail village and office and community space. In addition, the project developers—New York Belmont Partners—will improve two local parks in the surrounding community, Cuomo noted.

Through a public-private partnership, the developers will also help fund a new full-time Long Island Rail Road station in Elmont—the first new, full-time LIRR stop in nearly 50 years. This station will allow riders to access the new arena, hotel, and retail village from both the east and west, while providing a new commuting option for L.I. residents.

The arena is scheduled to be completed in time for the 2021–2022 hockey season, according to the administration. Over the next two years, construction of the arena, hotel and retail village is expected to create 10,000 jobs and generate $2.7 billion in economic activity. By 2024, the project is expected to sustain 3,200 new full-time jobs, produce $858 million in annual economic activity and generate tens of millions of dollars in new annual tax revenue.

Beginning next month, the Islanders have agreed to play 28 regular season games at NYCB Live, home of the Nassau Veteran’s Memorial Coliseum, during the 2019-2020 hockey season—seven more than previously announced. In total, 68 percent of the team’s regular season home games during the upcoming season will now be played at the Coliseum. (The team is able to play at the Coliseum thanks to $6 million in State-funded upgrades to the building.)

In January 2018, Cuomo announced the Islanders would return to Long Island three years ahead of schedule, later noting the team would play 20 games—or roughly half of their regular season home ledger—on Long Island.

“This is one of the largest and most impactful developments that have been done in the entire downstate region in a long, long time,” the governor gushed. “And you know what we call a project that brings three great things together—a new transportation terminal, a great economic development vehicle, and a great new sports stadium…three things all together in one project? The technical economic development term is ‘hat-trick’ my friends.”