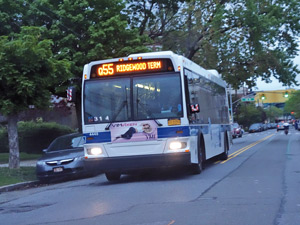 Wait times on the Q55 (Ridgewood-Richmond Hill via Myrtle Avenue) will be reduced by three minutes on Saturday mornings, according to MTA New York City Transit.

According to Craig Cipriano, acting president of MTA Bus Company and senior VP of New York City Transit’s Department of Buses, the agency is increasingly adding vehicles with longer buses equipped with better technology and customer-facing amenities on high-ridership routes that travel on streets that accommodate larger vehicles. By implementing these 60-foot articulated buses, more customers can be accommodated in one vehicle, thereby significantly increasing service without adding more vehicles to already crowded city streets.

“We are more nimble and responsive with the way we manage our bus operations and use new fleet technology, which results in better and cost-efficient service for our customers,” Cipriano added. “We will be looking to use more of these new state-of-the-art articulated buses as they are delivered, putting them on popular bus routes so that more of our customers can benefit from our modern new fleet.”

According to the MTA, for schedules to be implemented in January 2020, New York City Transit plans to adjust service on five routes, including:

Additionally this week, the MTA announced that seven Long Island Rail Road stations and four Metro-North Railroad stations will be made ADA-accessible as part of $1.5 billion in station improvements under the proposed 2020-2024 Capital Plan.

The MTA last week released the 2020-2024 Capital Plan that proposes investing $51.5 billion into the region’s subways, buses, and railroads over the next five years.