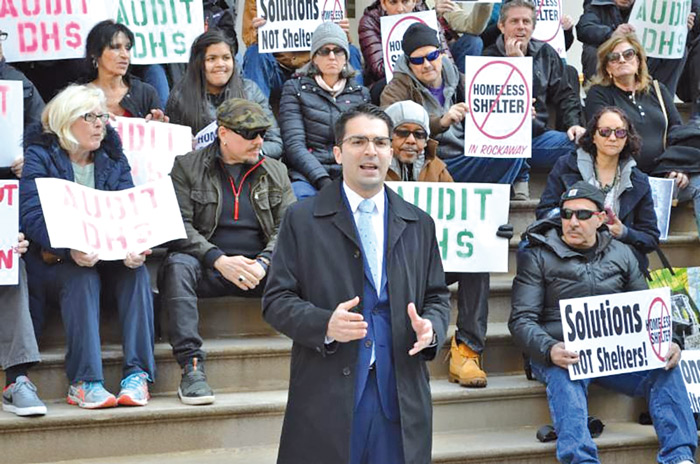 Councilman Ulrich argued that the City’s decision to house 120 homeless men at the proposed site is “entirely inappropriate.”

“Earlier this year, my office learned of the City’s plans to open a shelter for homeless men at 226 Beach 101st St. in Rockaway. We were not notified by any City agency, but by neighbors of the building that had spoken to construction workers at the site,” Ulrich wrote to Stringer in a letter dated Sept. 23. “I was very upset that the proposed building—a former warehouse, located within four blocks of three public school buildings housing an elementary school, three separate middle schools, and two high schools as well as a charter school—would be used to shelter homeless individuals.”

Ulrich later argued in the missive that the City’s decision to house 120 homeless men at the proposed site is “entirely inappropriate,” citing a lack of support services on the Rockaway Peninsula, as well as few occupational or residential opportunities in the area.

According to the councilman, the Mayor’s Office of Contract Services recently held their mandated hearing for the contract with the group Black Veterans for Social Justice to operate the facility. Ulrich pointed out that members of the council and the general public are not allowed to see copies of these contracts unless they physically appear at MOCS to review them. Even then—only notes are permitted and no copies can be made. Additionally, elected officials and community residents are not notified of these hearings unless they happen to review the City record every day.

“Locals who did make it to MOCS for the hearing have informed me that the contract actually calls for a ‘health and mental care facility,’ and a ‘treatment health care facility,’ rather than a transitional shelter,” Ulrich said.

“I’m respectfully requesting that the comptroller’s office use its authority for ‘reviewing City contracts for integrity, accountability and fiscal compliance,’ to determine exactly what type of facility is planned for this location, what services will be provided, and why so much money is being spent, and to make that information and a copy of the contract publicly accessible to my office and my constituents,” the South Queens councilman wrote in the final paragraph of the one-page letter to Stringer. “We intend to continue to fight the placement of this shelter as it is inappropriate for both the potential residents, as well as the neighborhood.”