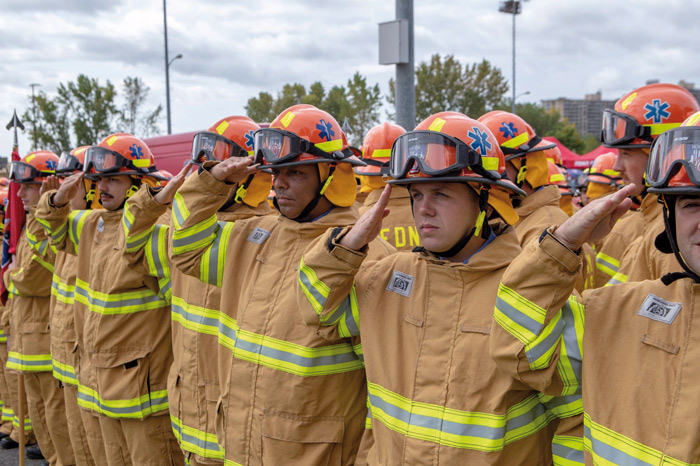 Elected officials and FDNY EMS union leaders recently rallied on the steps of City Hall to demand that FDNY EMS first responders receive equal pay and comparable treatment from the City as firefighters and police officers.

The members of the City Fire Department’s Emergency Medical Service Bureau receive $8,000 less in starting salary than other first responders; that gap widens by tens of thousands of dollars after five years of service, according to the latest available figures.

In June, City Councilman I. Daneek Miller (D-St. Albans), chairman of the Committee on Civil Service and Labor, conducted an oversight hearing that examined pay equity concerns at FDNY EMS. Fire Department officials testified that the attrition rate for its EMS Bureau is 6 percent, but indicated that members who leave to become firefighters are not counted as part of the official attrition rate at EMS, and estimated that nearly 800 of its personnel were lost to three classes that passed the department’s “Promotion to Firefighter” exam.

According to Miller, “it’s believed” that more than 1,000 members actually left EMS to become firefighters over a 12-month period. Eighty percent of new EMS hires leave within four years, taking with them their extensive medical expertise and training, Miller noted. Some members of FDNY EMS who served for more than a decade left their jobs to join the Department of Sanitation, and others have moved over to the NYPD, the Department of Corrections, and the Metropolitan Transportation Authority.

During last week’s rally at City Hall, Miller announced that he is introducing new legislation that would require FDNY to report on EMS resignations, and particularly capture the universe of members that voluntarily leave the division to become FDNY firefighters or gain employment with another municipal agency.

Additionally, Miller said that he is sponsoring a resolution calling on the City to provide salary parity for FDNY EMS personnel as first responders.

“Our first responders of color at EMS love their jobs, but don’t get a fair salary that keeps food on their families’ tables, and reluctantly leave for gainful employment as firefighters or sanitation workers,” said Miller, co-chairman of the council’s Black, Latino, and Asian Caucus. “The council’s Committee on Civil Service and Labor has led the way on the principle of pay equity on behalf of our City, and will continue to push this administration to be consistent with its progressive values by providing these brave women and men equal pay for equal work.”

Last month, the three union locals representing FDNY EMS workers filed suit in the U.S. Equal Employment Opportunity Commission alleging the City has engaged in discriminatory pay practices. The action follows a 2017 suit that the unions filed against the City to force the disclosure of pay and employment data that the plaintiffs have indicated would validate their claim of discrimination.

The City doesn’t agree. De Blasio administration officials have denied the allegation, and claimed the underpayment is due to their work being “different” from that of firefighters.