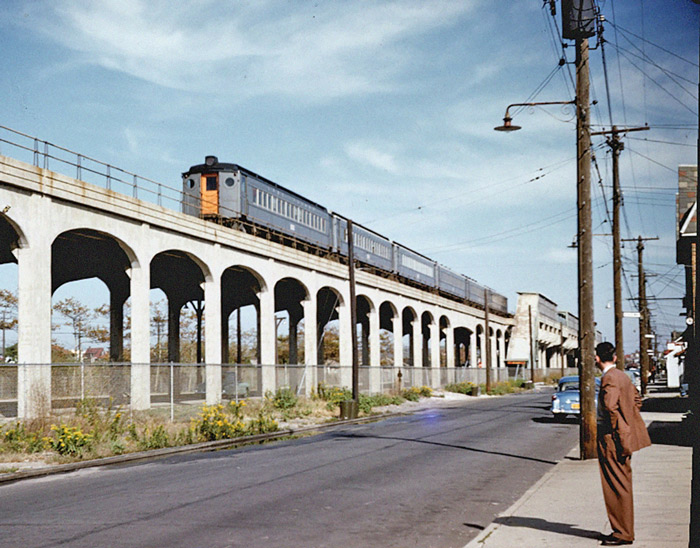 The Rockaway Beach Rail Line, pictured here in the 1950s, once ran from Rockaway to Rego Park.

“Restoring service on the RBRL would not only speed up commutes tremendously between South Queens and Manhattan, improve mobility within our borough, but also promote economic growth overall,” Pheffer Amato added after informing her constituents that she has been notified by the MTA that LIRR officials will soon be publishing the results.

In the meantime, the assemblywoman has provided a brief synopsis of the study’s findings.

“To be clear: the cost of the project cannot be an obstacle. We are talking about a real opportunity to give time back to commuters’ lives,” Pheffer Amato noted. “If this is what it will take to bring water to a transit desert, then give me a bucket!”

The assemblywoman also said “the time is now” to improve transportation in South Queens communities that have been underserved for generations.

“Moving forward, my office remains committed to bringing the LIRR, MTA, NYCT, and all relevant community partners into the same room to discuss our next steps,” Pheffer Amato pledged.

The feasibility study built upon previous efforts to review the line and transit issues in surrounding communities. In November 2014, a Queens College analysis indicated that a reactivated RBRL could generate 500,000 rides per day, and that a majority of local business owners supported the plan. Around this time, a report by the NYU Rudin Center for Transportation ranked many communities in the 23rd Assembly District among the lowest citywide for access to job opportunities via public transportation.

Proponents of what has been dubbed the QueensRail are devoted to the reactivation of the Rockaway Beach Rail Line. The defunct spur was put into service in the late 19th Century under the control of the LIRR and connected Rockaway and southern Queens with Rego Park, provided area residents with expedient access to other parts of the city, and 40-minute commutes to Midtown Manhattan from the Rockaway Peninsula. In the early 1960s, parts of the railroad service were condensed, sectioned off, and it eventually closed in 1962.