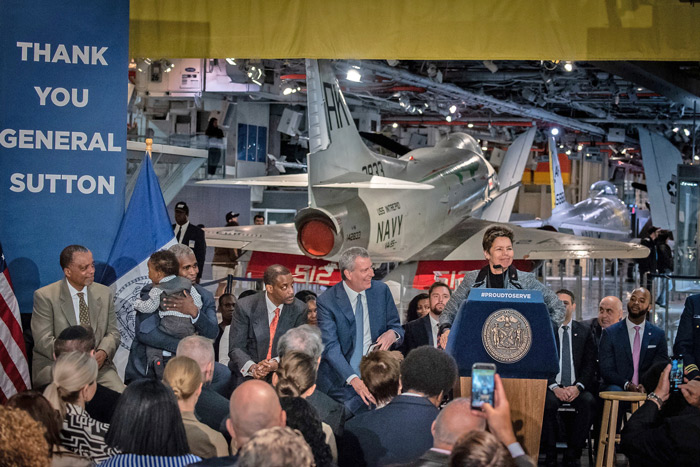 “To be able to foster better lives for New York City veterans and their families, who have dedicated their own lives to service—there is simply no greater privilege,” Sutton said.

At the end of the month, Brigadier Gen. Loree Sutton, M.D., will step down as commissioner of the City Department of Veterans’ Services, she announced Thursday before extolling the efforts of an area elected official who helped make her five-year run an historic one.

Sutton thanked City Councilman Eric Ulrich (R-Ozone Park) for his “partnership” during his tenure as chairman of the Council Committee on Veterans. In December 2015, Mayor Bill de Blasio signed into law a bill introduced by Ulrich that established the Department of Veterans’ Services, capping a two-year surge led by Ulrich to strengthen veteran services and resources in the five boroughs, including working with Council leadership and the administration to help quadruple funding and staff that transformed the 30-year-old Mayor’s Office of Veterans’ Affairs into today’s DVS.

“From building a team of dedicated public servants and establishing our organizational principles and procedures, to marshalling the collective will of community partners and finding innovative solutions for our city’s most vexing problems, the last few years have been a journey grounded in an unyielding commitment to ensuring New York City’s veterans and their families are supported and empowered,” Sutton said Thursday. “Service to others truly is our North Star. To be able to foster better lives for New York City veterans and their families, who have dedicated their own lives to service—there is simply no greater privilege.”

Sutton will be succeeded by James Hendon, former director of the NYU Veterans Lab and a lieutenant colonel in the U.S. Army Reserves who serves as the New York City Lead for the 75th Innovation Command.