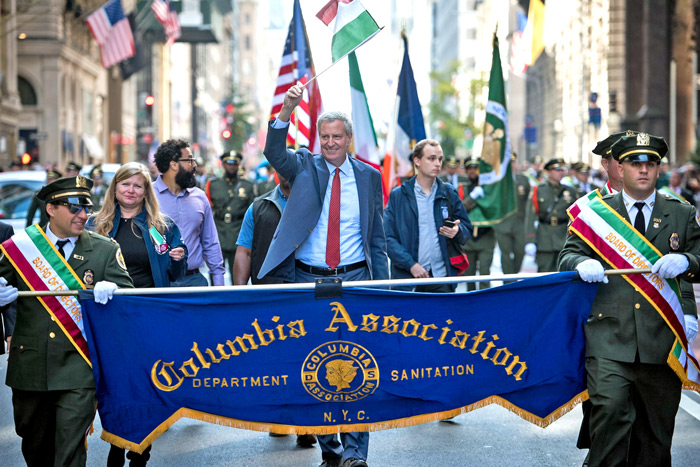 On Friday, Mayor Bill de Blasio—in his infinite wisdom—claimed that the vote for candidates for the “She Built NYC” campaign actually wasn’t a vote.

“It was a request for nominations,” Hizzoner said on “The Brian Lehrer Show” on WNYC-FM. “There were hundreds of women nominated to my understanding. It was not an online vote and whoever got the most votes win, there weren’t even that many votes honestly.”

Call it a nomination. Call it a vote. Call it a zebra if you want. Bottom line: Mother Cabrini got the most.

However, apparently that’s not good enough for Gracie Mansion standards. Despite earning this top ranking, a public Cabrini icon is not being planned.

As we said over the summer: Seems like just another example of your vote—YOUR VOICE—amounting to zero in this city.

“She Built NYC” is a new effort, led by City First Lady Chirlane McCray, to commission a public monument or artwork on City property that honors women’s history in the five boroughs.

“There are big gaps in our City’s public art, with few statues of women, trans and gender nonconforming people. The message that lack of representation sends is that these people have no value and did not make contributions to our city. This first step we are taking will help us more accurately show the diversity in the people who helped make New York City so great.”

McCray uttered those words last summer. If that’s the case, then why snub Cabrini? She certainly checks off all pertinent boxes.

She helped to establish the Missionary Sisters of the Sacred Heart of Jesus, taking in orphans and foundlings, opened a day school to help pay expenses, started classes in needlework and sold their fine embroidery to earn a little more money.

She established schools and orphanages despite tremendous odds. She was as resourceful as she was prayerful, finding people who would donate what she needed in money, time, labor, and support. She founded Columbus Hospital and Italian Hospital.

“Mother Frances Cabrini was certainly one of the women who built New York City. Her work to establish orphanages, schools, and a hospital, along with her commitment to immigrants, absolutely should be recognized. The failure to honor Mother Cabrini with a public statue would be an affront to many New Yorkers, especially Italian-Americans, who see her as most deserving,” Bishop of Brooklyn, the Rev. Nicholas DiMarzio, said.

We hope the mayor hasn’t pulled a hamistring—what with all the backpedaling and artful dodging he’s done on the subject.

“It was the beginning of a process,” de Blasio said on Lehrer’s show. “Mother Cabrini is an outstanding figure and absolutely worthy of being honored and another round of the statue process is about to begin and her name is clearly at the top of the list because she is an outstanding figure in New York history and obviously it would mean a lot to a lot of people.”

It would have meant a lot more if she was the first on the list of the first round, where she should have been the whole time.