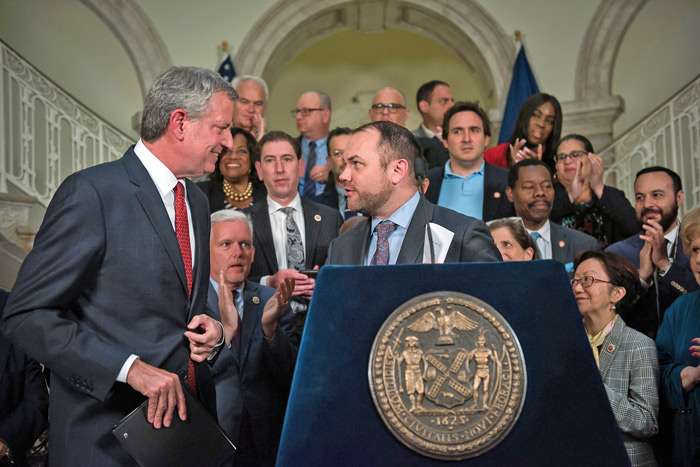 The City Council Land Use Committee passed a resolution Thursday authorizing the council to file an application at the Department of City Planning, to be co-filed with the Mayor’s Office of Criminal Justice and Department of Correction, to remap Rikers Island so that it will not be allowed to house incarcerated individuals after 2026.

The map change at Rikers will be done through the City’s Uniform Land Use Review Procedure. Through this ULURP, the City will seek to have the island designated as a “Public Place” on the City Map, which will ensure future development of the site will be solely for the public benefit, Mayor Bill de Blasio and Council Speaker Corey Johnson noted Thursday.

“We promised to close Riker’s Island, and we’re making good on that promise,” de Blasio said. “We’re making our commitment ironclad and ensuring no future administration can reverse all the progress we’ve made. Mass incarceration did not begin in New York City, but it will end here.”

City Councilman Costa Constantinides (D-Astoria) added, “We all know the moral imperative of closing the jails on Rikers Island, which will now be codified into law. This ULURP guarantees Rikers Island is not used to detain another soul by 2026, which will end this stain on New York City’s history. We must now look at how this island can be used to help the same communities that have historically seen over-policing and underinvestment.”

Thursday’s committee vote follows the City Planning Commission’s 9-3 tally last month in favor the administration’s proposal to shutter Rikers Island by 2026 and replace it with a smaller network of borough-based jails.

The controversial plan is now in the full council’s hands. The city’s legislative body is scheduled to vote on it this Thursday, Oct. 17.

In February 2018, de Blasio and Johnson agreed to a single public review process for the four proposed sites. These locations together will provide off-island space for 5,000 detainees, and will include the three existing DOC facilities in Queens, Brooklyn, and Manhattan, as well as a new site on the grounds of a former City Police Department tow pound in the Bronx.

The World’s Borough site is the Queens Detention Center at 126-02 82nd Ave. in Kew Gardens. According to the administration, the City would demolish the existing facility and replace it with a modern one. The new jail would have housing units for detainees, programming and recreational space, and a new above-ground public parking facility. On the ground floor there would be publicly-accessible community space.

Critics of the Borough-based Jail System proposal are leery of the new facilities and the seemingly breakneck pace that has been implemented to get them up and running.

“Reforming our city’s jails system is too critical a mission to take on without adequate community engagement or proper planning, as we must strive to avoid recreating the same atmosphere of violence and dehumanization found on Rikers Island upon four new facilities in neighborhoods across the city,” Queens Borough President Melinda Katz wrote in June in her official recommendation of disapproval.