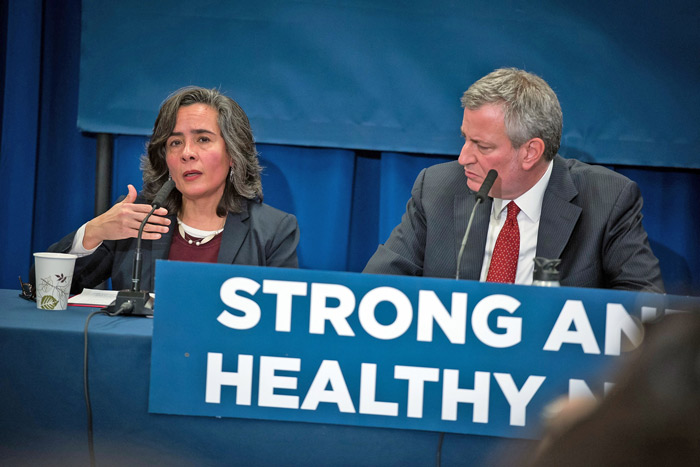 The City will be conducting a 30-day review of how its agencies use Kendra’s Law and other intensive mental health interventions, particularly mobile treatment teams, to make sure those in need receive treatment and stay connected with it, Mayor Bill de Blasio announced Friday.

According to de Blasio, the review will be led by City Department of Health and Mental Hygiene Commissioner Oxiris Barbot, M.D., and NYPD Chief of Department Terence Monahan. Under the direction of DOHMH and NYPD, NYC Health + Hospitals, the City Department of Homeless Services, and Thrive will review clients who are potentially eligible for Assisted Outpatient Treatment through Kendra’s Law and make referrals to DOHMH, triggering an immediate clinical review for the courts’ consideration. Agencies will also review this caseload to facilitate connections to other intensive mental health interventions, including the City’s mobile treatment teams where appropriate.

Kendra’s Law is named for Kendra Webdale, who, in 1999, was pushed by Andrew Goldstein into the path of an N train at 23rd Street. Goldstein, then 29, was diagnosed with schizophrenia but off medication at the time of the incident. The law grants judges the authority to issue orders that require people who meet certain criteria to regularly undergo psychiatric treatment.

According to the administration, court-ordered Assisted Outpatient Treatment, through Kendra’s Law, is up 20 percent since the mayor took office. Additionally, in 2016, the City increased investment in the Office of Assisted Outpatient Treatment at the Department of Health and Mental Hygiene by adding twenty additional staff to ensure people are engaged in AOT. Over the next 30 days, the City will review its use of AOT, or Kendra’s Law.

“A review of services is important to improve the system of care for people affected by mental illness,” Barbot said. “Bottom line is that services are key to better health outcomes faster. We will assess routes into treatment to maximize engaging those most in need.”

De Blasio Friday touted “historic investments” his administration has already made in mobile treatment teams, including Assertive Community Treatment Teams and Forensic Assertive Community Treatment Teams. In 2016, the City launched Co-Response Teams comprised of a mental health professional and police officers to help individuals in crisis. Additionally, the Health Department launched Intensive Mobile Treatment, an interdisciplinary team including peers that provide long-term behavioral health treatment and supportive services. These teams are designed to support people living with a serious mental illness who are not traditionally engaged in care. In 2015, the administration created NYC Safe to provide a continuum of services, including mobile treatment teams, for a subset of people living with a serious mental illness who pose a risk to others.

“This review will comprehensively assess the mental health care programs and services that provide support for some of the city’s most vulnerable residents,” said Police Commissioner Jim O’Neill. “This effort backs the everyday mission of our officers to effectively protect those we serve while also keeping one another safe.”