The attack occurred in August 2016 at the family’s 113th Street home.

A Far Rockaway resident has been convicted of murder, assault, and other crimes for the 2016 beating death of a man and the wounding of his mother inside of the victims’ Richmond Hill home, Acting Queens District Attorney John Ryan announced Thursday.

According to trial testimony, shortly after 1 a.m., on Aug. 14, 2016, Jones entered the 113th Street home of public-school teacher Kenny Schemitz and his mother, Vivian Schemitz. Jones, with the help of an unapprehended man, pummeled and stabbed the son with two cans of paint, a weed whacker, a lamp, and knives. After the attack, Jones and his accomplice were seen on video surveillance fleeing the area covered in white paint. 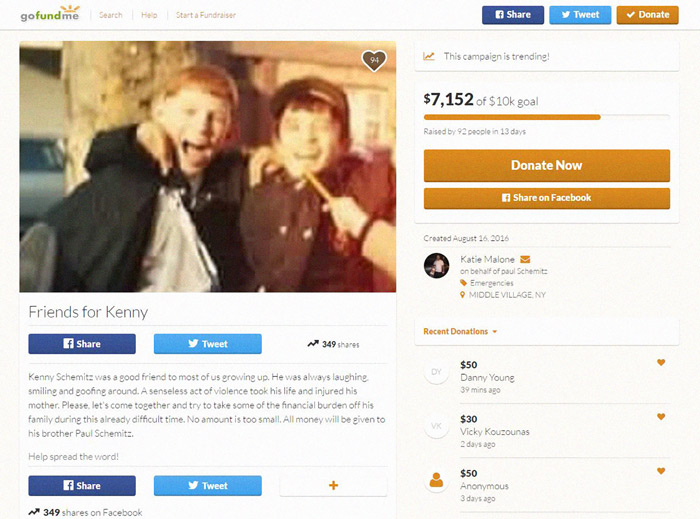 File Photo
Shortly after the murder, friends created a crowdsourcing page on GoFundMe.com to “take some of the financial burden off [Kenny’s] family during this already difficult time.”

According to trial records, despite being badly beaten, Vivian Schemitz, then 68, managed to call 911. Upon entering the home, police found Kenny’s lifeless body behind a door. The 37-year-old victim’s body showed signs of blunt-force and sharp-force trauma to both his head and neck. Vivian sustained numerous facial fractures, lacerations, and a concussion and was rushed to Jamaica Hospital Medical Center where she underwent surgery.

According to trial testimony, Jones’s right pinky finger was a match to a fingerprint left in white paint at the Schemitz home.

“The defendant in this case relentlessly beat and battered the victims in their home with whatever objects he could grab from inside the residence. After the attack, the house was a torrent of violence with white paint and blood splattered everywhere with one man literally beaten to death and his mother severely injured,” Ryan said. “The jury weighed all the evidence and found the defendant guilty of these heinous crimes. He now faces a very lengthy term of incarceration for his actions.”

Sentencing has been set for Nov. 1, at which time Jones faces up to 50 years to life in prison.

Though the victims undoubtedly were targeted, detectives had difficulty determining a motive for the early-morning attack. Also of note: A blaze broke out at the two-family Schemitz abode a few months prior to the murder. After an investigation, City fire marshals concluded that the inferno had been deliberately set.