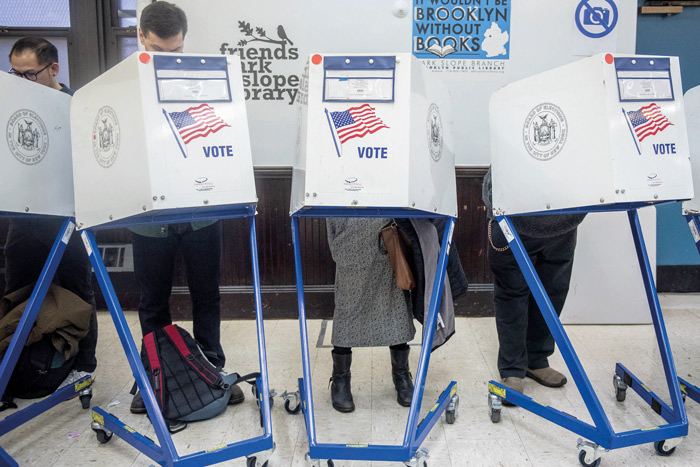 There will be proposals to amend the City Charter on the back of the Nov. 5 General Election ballot.

State Sen. Joe Addabbo, Jr. (D-Howard Beach) on Thursday reached out to constituents to remind them that on Election Day (Nov. 5), in addition to voting for candidates for Public Advocate and Queens District Attorney, they should check the back of the ballot because there they will find proposed amendments to the City Charter.

According to the digital encyclopedia of American politics and elections, ballotpedia.org, the Nov. 5 proposals include:

A YES vote on this question means the voter is in favor of amending the City Charter to establish ranked-choice voting to be used for primary and special elections beginning in 2021; to increase the time between a City office vacancy and the special election to fill it from 45 days (60 for mayor) to 80 days; and to change the timeline for City Council redistricting to complete it prior to City Council nominating petition signature collection.

A YES vote is a vote in favor of amending the City Charter to add two members to the 13-member CCRB—one appointed by the Public Advocate and one jointly by the mayor and speaker of the Council; allow the City Council to appoint members directly without the mayor having final appointing authority; require the CCRB annual budget to be enough to hire employees for at least one CCRB for every 154 police officers (0.65 percent of the City’s police force) unless the mayor determines that fiscal necessity prevents it; add to the city charter the requirement that the city police commissioner to provide an explanation to the CCRB whenever the board’s disciplinary recommendations aren’t followed; authorize the CCRB to investigate the truthfulness of statements made during its investigation of complaints; and allow the CCRB to delegate its authority to issue and enforce subpoenas.

A charter amendment that relates to the City Land Use Charter by seeking to change the Uniform Land Use Review Procedure Requirements.

A YES vote is in favor of amending the City Charter to require the Department of City Planning to provide a summary of ULURP projects to the borough president and community board affected by the project 30 days prior to when the project application is certified for review by the public; and increase the amount of time allowed for review of the ULURP projects by the affected community boards from 60 days to either 75 days or 90 days, depending on timing.

“It is important for voters to know and understand what they will be voting on,” Addabbo said. “I hope this informational release will give voters a better understanding of the New York City Charter, what changes are being proposed, and what would happen with the city if one, or any, of these proposals passes on Election Day.”