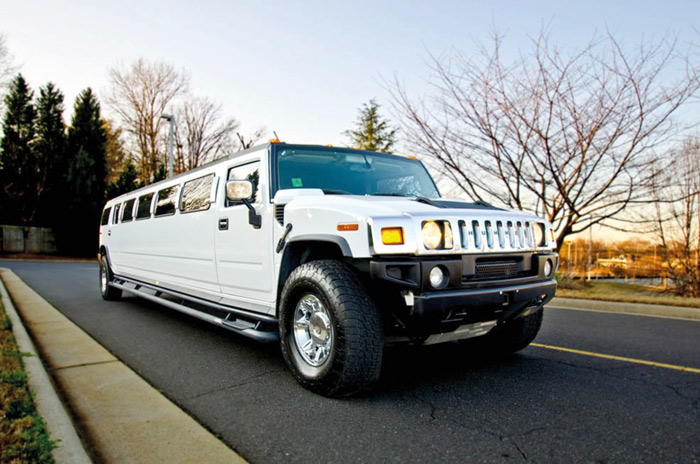 Bopari allegedly illegally operated a stretch Hummer limo similar to the one pictured.

A Richmond Hill man has been arrested for allegedly lying on registration forms and claiming that his stretch Hummer limousine was a seven-passenger vehicle, Acting Queens District Attorney John Ryan recently announced.

Lovepreet Bopari, 23, is also accused of purchasing a cheaper insurance policy that would not have covered a commercial vehicle. The paperwork deception allowed Bopari to avoid strict safety regulations, Ryan added.

Bopari was arraigned last week on a criminal complaint charging him with second-degree grand larceny, first-degree falsifying business records, and first-degree offering a false instrument for filing. He was released on his recognizance and ordered to return to court on Nov. 19.

According to the charges, on Sept. 6, Bopari submitted a title registration application to the State Department of Motor Vehicles listing himself as the registrant and title owner of a 2007 Hummer. Bopari allegedly falsely stated that the vehicle seated seven people and would only be driven for personal use. Bopari also allegedly said that at no time had the vehicle been modified in a way that would change its registration class.

Inspections of the vehicle by investigators found that the Hummer actually had been extended to a 31-foot limo, and had a business decal on it advertising that the vehicle could seat up to 20 passengers. The inspection also revealed that the limo was in violation of safety standards—it did not have a fire extinguisher, warning signs, or other devices required for a limousine of such size.

According to the charges, on Oct. 2, when questioned about the Hummer, Bopari allegedly admitted to operating the vehicle as a for-hire stretch limousine until he was “caught” by the State Department of Transportation. According to the criminal complaint, Bopari also allegedly made false statements on insurance forms and underinsured the limo with a $50,000 policy for a personal vehicle—however, the insurance company does not insure limos and would not have issued the policy had they known the truth.

Ryan added that, by falsely registering and insuring the vehicle as his personal car, Bopari allegedly deliberately avoided strict safety standards and having to fork over the full amount of insurance coverage in the event of an accident. The State DOT requires semi-annual safety checks of motor vehicles with seating capacity exceeding 15 people. The safety requirements are more stringent than personal passenger cars.

Ryan said that “every single person that stepped into [Bopari’s] limo for a ride was at grave risk.”

“The defendant is accused of knowingly operating a for-hire limousine service and failing to comply with state guidelines established to ensure the safety of passengers riding in commercial vehicles. The defendant is alleged to have made false statements on DMV documents and secured a regular insurance policy from a company that doesn’t even offer commercial coverage,” the acting DA said. “[Bopari] will be held accountable.”