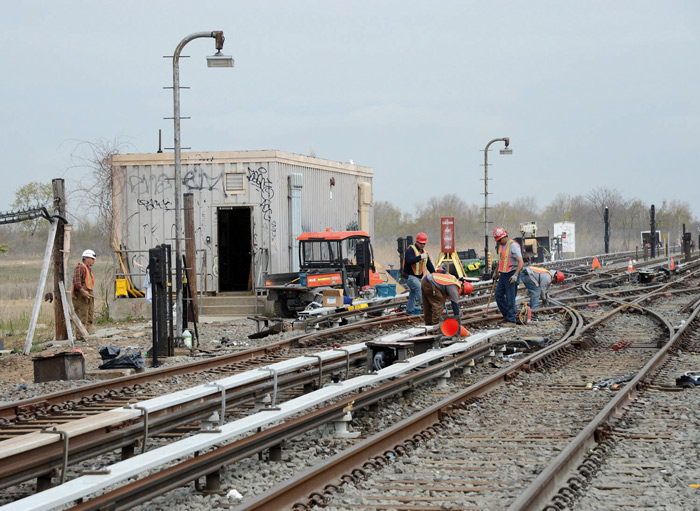 The Rockaway line of the A train was severely damaged during Superstorm Sandy. Here MTA crews work on track north of the Broad Channel station.

The Metropolitan Transportation Authority has made substantial progress to restore, repair, and fortify its infrastructure in the event of extreme weather, agency officials announced Tuesday—the seventh anniversary of Superstorm Sandy.

“We came back from devastation seven years ago and the work to adapt every part of our system has yielded a stronger, smarter, and greener system for millions of New Yorkers,” MTA Chairman and CEO Pat Foye said. “We have a responsibility to the entire region to make sure we finish the job, and we will do so.”

In Metro-North and LIRR service areas, the storm downed trees and poles along hundreds of miles of tracks, damaging equipment, switches, crossings, overhead wires and facilities housing railcars and locomotives.

According to MTA officials, over the last seven years the agency has hardened its infrastructure and protected facilities and fleets by installing flood-mitigation equipment in subway stations and under-river tunnels; waterproofing facilities; raising power and communications equipment above flood levels; rebuilding facilities at higher ground; and installing various protections such as marine doors, flood logs, and flood curtains at 79 station entrances.

Examples of major MTA Sandy restoration and resiliency projects in Queens include the Cross Bay Veterans Memorial Bridge where electrical equipment and substations have been replaced and elevated; and erosion protection at abutments have been upgraded.

At the Midtown Tunnel, four 29 feet-by-14-feet, 2-foot thick, 44,600-pound flood doors have been installed at the entrance; and reconstruction of electrical, lighting, communications and pumping systems, and replacement of the tunnel wall tiles, ceiling panels, catwalks, curbs and gutters, have been completed.

During the storm, a historic 9.5-foot surge flooded the Midtown Tunnel with roughly 12 million gallons of contaminated saltwater that severely damaged all tunnel systems, including electrical, lighting, communication, traffic controls, drainage, and finishes.

“I am proud of the progress that the MTA has made to recover and to rebuild, not just to get the trains and buses moving, but to prepare for the severe weather that our future will bring inevitably due to climate change,” said former MTA Chairman Joseph Lhota, who helmed the agency when Sandy tore through the city. “I am confident that the MTA is more prepared than ever to face storms even stronger than Sandy.”