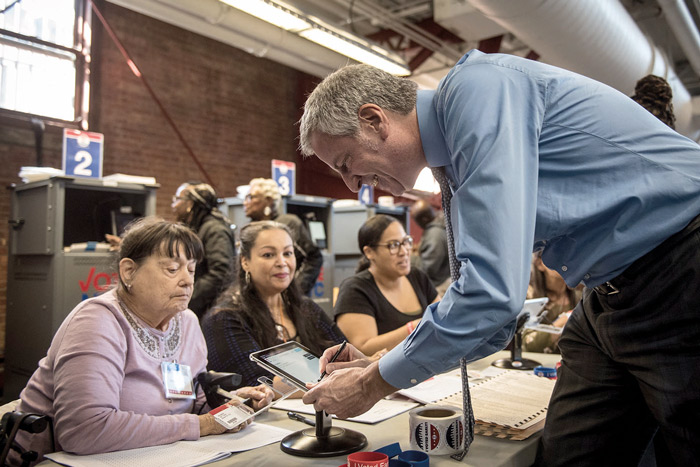 Mayor de Blasio on Saturday participated in the first day of early voting at the Park Slope Armory.

“It was amazing, absolutely amazing,” de Blasio gushed to Spectrum News NY1’s Errol Louis on “Inside City Hall” Monday, two days after Hizzoner and First Lady Chirlane McCray voted early at their poll site in Brooklyn. “It’s going to revolutionize voting because I think for so many New Yorkers, the voting experience has actually gotten worse and worse, and more and more frustrating. And people—I’ve heard so many people tell me particularly on Election Day that they got sick of waiting in line or they didn’t know if the machine would be fixed and they walked away. That never has to happen again because so many of the votes will happen before Election Day. Election Day is still going to be busy but it’s not going to be anything like what we’ve experienced before. And it’s actually some real good news.”

For the 2019 general election, early voting runs from Saturday, Oct. 26, to Sunday, Nov. 3. Hours vary by day and include morning, evening, and weekend hours. Registered voters will be assigned to one early voting poll site in the borough in which they reside.

Administration officials also noted that New Yorkers who prefer to vote on Election Day still may do so on Tuesday, Nov. 5 from 6 a.m. to 9 p.m. at their poll site.

To find early voting and Election Day poll sites, operating hours, and what’s on the ballot, visit voting.nyc or call 311.