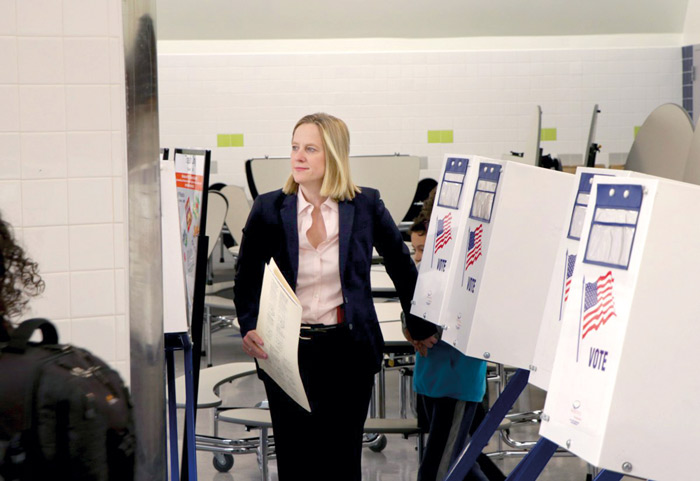 Photo Courtesy of the Katz campaign

As expected, Melinda Katz crushed her GOP opponent Joe Murray on Tuesday on her way to succeeding Richard Brown as district attorney of Queens County—the first woman to hold the office.

On an Election Day once again marred by meager turnout, Katz, who currently serves as borough president, garnered approximately 75 percent of the vote, a far cry from the protracted primary battle with upstart public defender Tiffany Cabán.

Following a recount, the City Board of Elections in July declared that Katz had defeated Cabán by a mere 60 votes. Cabán shocked most pundits by seemingly striking an upset win way back on primary night on June 25. As of Wednesday, June 26, the Richmond Hill native led Katz by nearly 1,100 tallies.

After approximately 4,000 absentee ballots were counted in the week after the primary, Katz took a razor-thin 16 vote advantage. And according to the BOE, a recount of all ballots is required when the margin of victory is less than one half of one percent of all votes.
Under the watchful eyes of attorneys on both sides, BOE staffers manually recounted all ballots at the agency’s Queens voting machine facility inside of Metro Mall in Middle Village.
In the end, Katz bested Cabán 34,920 to 34,860.

Katz has said that preventing crime and stopping people from becoming victims in the first place will always be the better solution. To that end, she has promised arrest, bail and sentencing reforms; ending marijuana prosecution and arrests; and to establish a Conviction Integrity Unit to examine cases and make recommendations for exoneration.

In other off-year election news, Jumaane Williams soundly defeated Councilman Joe Borelli (R-Staten Island) to maintain the office of public advocate. This marked the second time that Williams has won the race for PA in the past nine months. He emerged victorious in the February special election, earning 33 percent of all tallies to fellow Councilman Eric Ulrich’s (R-Ozone Park) 19 percent.

All five City Charter revision proposals were approved Tuesday by voters, including the most significant change: ranked-choice voting. According to City and State New York, beginning in 2021, races for mayor, public advocate, city comptroller, City Council and borough president, voters will no longer pick just one candidate, but rank up to five by preference. If no candidate receives an outright majority of first-choice votes, the bottom candidate gets eliminated and the second choices on his or her ballots get redistributed. This continues happening until a winner emerges with the majority.