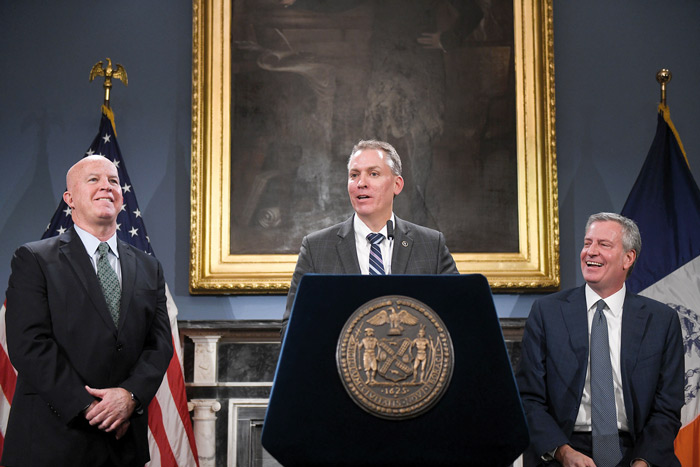 Police Commissioner Jim O’Neill announced Monday that he will be resigning his post as Gotham’s top cop later this month for an opportunity in the private sector.

O’Neill, 62, who has been in law enforcement since joining the Transit Police in 1983, was appointed the 43rd police commissioner of the city by Mayor Bill de Blasio in September 2016, succeeding former Commissioner Bill Bratton.

“Jimmy has done so many extraordinary things—I literally do not have enough time to list them all,” de Blasio said on Monday at a press conference at City Hall to announce the developments in the department.

As a lieutenant in the NYPD, O’Neill worked at the Police Academy and the warrant squad before being promoted to captain and executive officer in the 52nd Precinct in the northern Bronx. He served as the commanding officer of three successive precincts: Central Park, the 25th Precinct in eastern Harlem, and the 44th Precinct in the western Bronx.

It was as CO of the 44th Precinct, one of the busier commands in the city, that O’Neill began to think seriously about reforming the NYPD patrol model started to develop what would become Neighborhood Policing: a crime-fighting plan that anchors officers in sectors and provides them with off-radio time to connect with community members and work at local problem-solving.

“Fighting crime is what we get paid to do,” O’Neill said of Neighborhood Policing. “But we can’t do that unless we achieve full partnership with the community. Unless we have that connectivity, it’s not going to work.”

As a result, O’Neill has presided over the lowest crime rate in the five boroughs since the NYPD started tracking major crime, as well as the fewest number of homicides recorded since the 1950s.

O’Neill grew up in East Flatbush, Brooklyn, and was one of seven children. He recently moved to Queens. O’Neill has two sons, Daniel and Christopher.

“On behalf of all New Yorkers, I want to express deep gratitude to Jimmy O’Neill for dedicating his entire career to keeping our city safe,” de Blasio said. “Jimmy transformed the relationship between New Yorkers and police, and helped to make the department the most sophisticated and advanced in the country.”

De Blasio announced Monday that Chief of Detectives Dermot Shea would be succeeding O’Neill as commissioner.

Shea, 50, who grew up in Sunnyside, began his service as a police officer in 1991 and rose through the ranks to become chief of Crime Control Strategies and deputy commissioner for Operations under Bratton, where he oversaw and honed the department’s legendary CompStat system.

The mayor characterized Shea as “a proven change agent, using precision policing to fight crime and build trust between police and communities.”

“Dermot is uniquely qualified to serve as our next police commissioner and drive down crime rates even further,” de Blasio added.

Shea said that he is “committed to building on the incredible success of Neighborhood Policing and precision policing, while continuing my life’s work to eradicate gangs and guns from our streets. Every New Yorker deserves to be safe and feel safe, and that has been my mission since I took the oath and became a police officer 28 years ago. As police commissioner, this will be what drives me.”