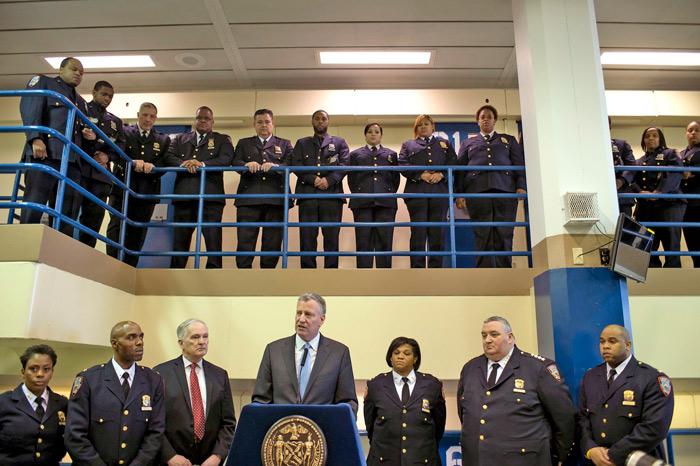 “New York is again debunking the notion that you must arrest your way to safety,” Mayor de Blasio said.

The move to shutter the Eric N. Taylor Center on Rikers Island in March and the Brooklyn Detention Complex, also known as “Brooklyn House,” in Boerum Hill by the end of January is part of the City’s seismic shift away from Rikers Island to new borough-based jails in Queens, Brooklyn, the Bronx, and Manhattan.

According to the administration, the closures will allow the City Department of Correction to concentrate resources more effectively, “resulting in better conditions, enhanced programming, and safer facilities for both people in custody and correctional staff.” Brooklyn House opened in 1957 and currently houses about 400 people, with a capacity of 759. EMTC, built in 1964 and expanded in 1973, has capacity of 1,719 and houses about 850 people who are serving City sentences of one year or less. Staff at BKDC and EMTC will be reassigned to other facilities, and the closures will not result in any layoffs. In addition, admissions that are currently processed in Brooklyn House will be accommodated in other borough facilities. No one who is currently housed in BKDC will be moved to Rikers Island unless there is a specific housing need, de Blasio noted.

Hizzoner also pointed out on Thursday that NYC’s jail population has fallen below 7,000—giving the Big Apple the lowest rate of incarceration and lowest crime rate of any large city in the country.

“New York is again debunking the notion that you must arrest your way to safety,” de Blasio added. “These two closures show that we are making good on our promise to close Rikers Island and create a correctional system that is fundamentally smaller, safer, and fairer.”

In October, the City Council voted in favor of a polemic plan to permanently close the antiquated jail network on Rikers Island and replace it with four new borough-based facilities. The tally was tied to a commitment by the City to invest $391 million—including $126 million in previously planned investments and $265 million in new programming—to reform Gotham’s criminal justice system and address the root causes of incarceration.

The Queens borough-based jail is set to be constructed on the site of the defunct Queens Detention Center at 126-02 82nd Ave. in Kew Gardens. According to the administration, the City would demolish the existing facility and replace it with a modern one. The new jail would have housing units for detainees, programming and recreational space, and a new above-ground public parking facility. On the ground floor there would be publicly-accessible community space.

“Since the City Council voted to close Rikers and implement a borough-based jail system, we knew this was only the beginning of the work needed to accomplish this historic plan to drastically change decades of mass incarceration,” said Councilman Donovan Richards (D-Laurelton), chairman of the Committee on Public Safety. “It is very encouraging to see the de Blasio administration moving quickly on the first steps towards achieving this goal by shutting down the first two facilities where detainees suffer some of the worst conditions.”