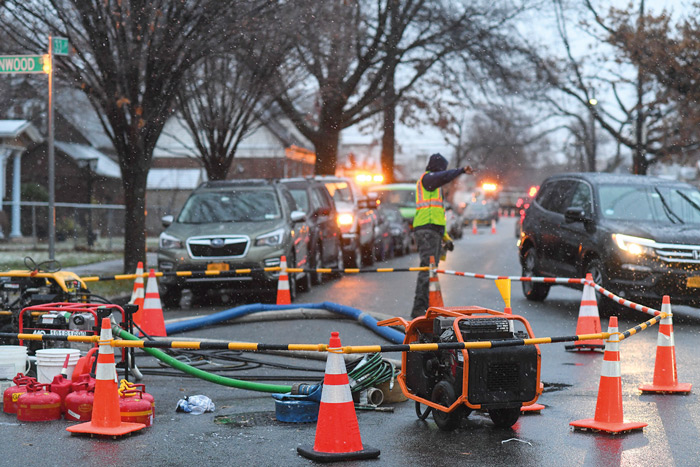 To date, the City has confirmed that 74 homes in South Ozone Park and Jamaica were affected by flooding.

The City will use emergency procurement to hire contractors to clean dozens of homes in South Ozone Park and Jamaica that were affected by last weekend’s sewer main blockage, Mayor Bill de Blasio announced Monday.

To date, the City has confirmed that 74 homes were affected by flooding. The Department of Environmental Protection has installed a bypass pump to assist with flooding while repairs to the sewage line at 150th Street and South Conduit Avenue are ongoing and additional equipment is brought into the area, the mayor added.

“I feel for the homeowners in Queens who were affected by the sewage blockage this weekend,” de Blasio said. “We are implementing the emergency procurement process to ensure that homes are cleaned quickly, and we are going to work with each and every New Yorker who experienced flooding to make sure they get back on their feet.”

The Department of Small Business Services is working with Emergency Management on the effort. Scrubbing will continue until all homes are clean, de Blasio pledged, while residents file claims with their insurance companies and reimbursement claims with the City comptroller.

The administration has set up a service center at the Courtyard Marriot at 145-11 North Conduit Ave. to function as a central point for homeowners to reach resources; hours of operation are 9 a.m. to 8 p.m. City workers at the service center will help affected residents fill out claim forms from the Comptroller in order to be reimbursed for out-of-pocket expenses. According to Emergency Management, this work may involve potentially taking down sheet rock, ripping up carpets and other flooring materials, and related work. Materials taken down or removed due to the sewage backup during the work process will not be replaced; that will be the homeowner’s responsibility. Anything that homeowners wish to retain from the work area should be removed prior to the contractor arriving to begin work. If the property is not properly cleared for work, the contractor will move on to the next homeowner’s property and the appointment will need to be rescheduled.

OEM and the City Fire Department brought in portable heaters for those whose boilers were affected. Drinking water remains safe and unaffected, de Blasio declared.

“I’ve seen for myself the distress residents faced when their holiday weekend was disrupted by the destructive sewage backup that has left many homes seriously affected,” said U.s. Rep. Greg Meeks (D-Jamaica). “While we work with the City to use emergency contractors to unflood basements and restore the sewage system, I urge residents in need to seek services at the Courtyard Marriot where we will have City representatives available to address your concerns.”