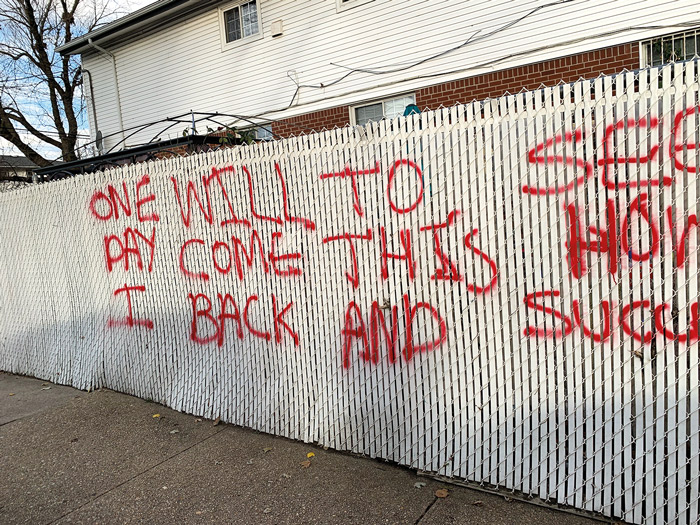 That was how one Lindenwood homeowner described her initial reaction Thanksgiving morning after she first laid eyes on her fence—the pristine white fence now defaced with vulgar and seemingly incoherent messages autographed in bright red spray paint.

In a Tuesday evening phone interview, the long-time Lindenwood resident, who requested that The Forum not print her name for fear of reprisal, recalled that her neighbor knocked on her door around 8:30 Thursday morning to show her what he discovered as he walked his dog.

“ONE DAY I WILL COME BACK TO THIS AND SEE HOW SUCCESSFUL I AM!” and “I NEED P***Y ASAP,” was scrawled along the fence at the house on 151st Avenue between 81st and 82nd streets in large block letters. Additionally, she noticed the word “F**K” painted on a tree in front of her home.

“I guess you could say I was in shock,” the victim posited, “because I’m here [in Lindenwood] for 25 years; in this house for 17 [years]. I was kind of taken aback.”

The homeowner quickly learned that she was not alone. Across the street from her residence, the same artist left “F**K WHITE PEOPLE” in black paint with each word underlined in red on the sidewalk in front of another abode.

By 9 a.m. the block was swarming with law enforcement.

“Acts of intolerance are not acceptable,” said Capt. John Costello, commanding officer of the 106th Precinct

However, as of Wednesday afternoon, the perpetrator had not been identified or caught. The 106 has beefed up its presence in the area.

Area residents were puzzled by the hate crime in such a quiet neighborhood in The World’s Borough.

When asked if Lindenwood was an exclusive community, the homeowner whose fence was damaged by the graffiti replied “absolutely not—especially not Lindenwood. We have a multitude of nationalities, personalities, and races.”

She also noted that she was not going to let this affect her this holiday season.

“We just put up Christmas decorations,” she reported. “This is supposed to be the happiest time. You just can’t let certain things get under your skin.”