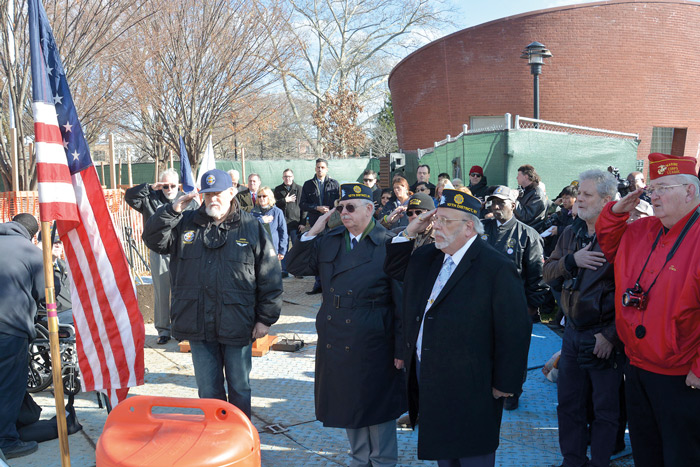 From Jan. 1 thru Dec. 31, any year, you’ll find some event, extravaganza, civic meeting, or academic symposium on any given date in Queens.

They don’t call us The World’s Borough for nothing.

However, every so often an extra special date arrives. Next Friday, Dec. 20, is one of those dates.

Mark your calendars. Everyone.

Because Queens Borough President Melinda Katz and the City Parks Department will hold a ribbon cutting ceremony for the new Queens Vietnam Veterans Memorial in Elmhurst Park on Friday, Dec. 20 at 10:00 a.m.

Built on the northwest corner of Elmhurst Park, the first-of-its-kind boroughwide memorial in Queens features the names of 371 service members who called Queens home and died during the Vietnam War or served and are classified as “missing in action.” The memorial also recognizes borough veterans who have since lost their lives as a result of their service during the conflict.

Two semi-circular granite walls will flank the space. One will bear the name of the memorial, the five crests of the military and the Vietnam Service Medal, which is awarded to all military members who served in the Vietnam War. On the inside of this wall will be an etching of bamboo, which represents a common element of the war.

The second wall will offer a history of the Vietnam War that will list key events and dates. This wall will also bear the names of Queens residents who served in the Vietnam War who were either killed in action or are listed as missing.

Construction of the memorial has been long sought after by many of the nearly 59,000 Queens veterans, led by late former Vietnam Veterans of America Chapter 32 President Pat Toro. Prior to his passing in 2014, the Marine Corps vet was a staunch advocate for a boroughwide memorial to recognize the sacrifices made by hundreds of Queens residents and their families during the Vietnam War.

The memorial’s design and construction was fully funded by Borough President Katz, who has allocated $2.3 million in capital funding between fiscal years 2017-18, which comes on top of the $550,000 first secured in FY2008 by then-City Councilwoman Katz.

“In 2008 Pat Toro had an idea for one central memorial for all of the Queens war dead,” O’Kane said. “Borough President Melinda Katz was the first to sign on and offer support for this project. Without her support this wouldn’t have gotten done. Chapter 32 of the Vietnam Veteran of America offers our thanks for her backing and support.”

Vets and elected officials broke ground on the memorial site in November 2018.

“To our veterans of the Vietnam War, we know the sacrifices you made, the sacrifices your families made. The Queens Vietnam Veterans Memorial will help ensure generations never forget, and remind our borough, city and nation to remain ever grateful,” Katz said at the time.