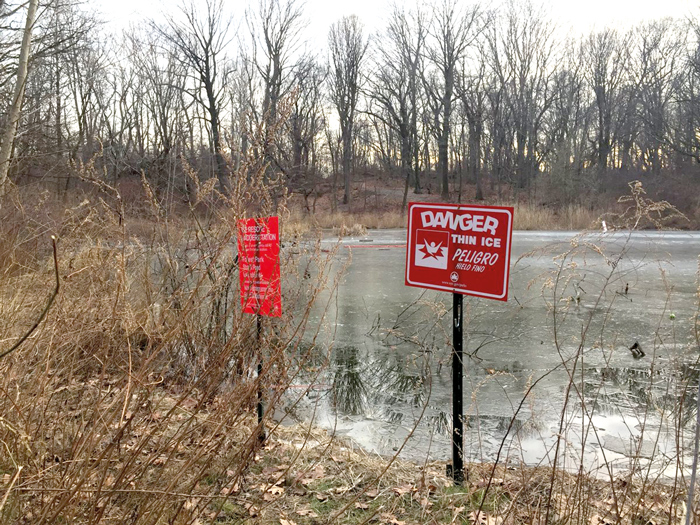 Two boys were saved on Christmas by an alert third buddy who snatched a City Parks Department ladder to help the duo escape a chilling end after they had fallen through a thin sheet of ice and into the frigid waters of Strack Memorial Pond in Forest Park, according to the City Fire Department and published reports.

The boys who fell into the pond, ages 9 and 12, were rushed to Jamaica Hospital Medical Center for exposure and other non-life-threatening injuries. The age of their quick-witted rescuer could not be ascertained at press time. First responders did not provide the names of the three boys.

All were expected to fully recover.

According to the City, to warn park visitors of the dangers of thin ice, NYC Parks posts warning signs around waterbody perimeters in all five boroughs. Additionally, special red ladders are installed around the edges in the event of an emergency.

In February 2018, an 11-year-old Glendale boy died at Jamaica Hospital hours after firefighters pulled his unconscious body out of ice-capped Strack Pond.

Anthony Perez and an unidentified 12-year-old friend were standing on the pond when the older boy ventured too far out—about 50 feet, according to firefighters—and the thin sheet of ice gave way, plunging him into the murky water.

Anthony jumped in and pushed his friend to safety. But he was unable to extract himself and eventually slipped under the ice. His buddy ran to get help.

According to published reports, Anthony was submerged for approximately 30 minutes before FDNY crews could drag him out.