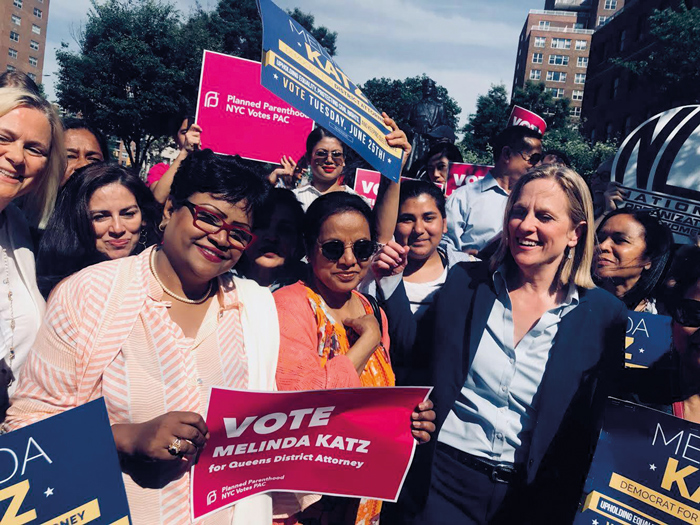 With one eye on 2020, The Forum takes a look at the stories that made 2019 one of the most exciting years to chronicle the characters and concerns, issues and events that shaped The World’s Borough and the lives of its proud residents.

On Feb. 12, Det. Brian Simonsen and Sgt. Matthew Gorman responded to a radio call for a robbery in an Atlantic Avenue cell phone store. Simonsen a 19-year veteran of the 102nd Precinct and the NYPD, was fatally shot once in the torso. He was 42 years old. Sergeant Matthew Gorman, 31, was seriously wounded as a result of being shot in his left leg.

Simonsen and Gorman were mistakenly shot by fellow officers who were also responding to the chaotic scene in Richmond Hill.

According to the charges, Ransom and Freeman arrived together at the T-Mobile store on 120th Street and Atlantic Avenue. Shortly after 6 p.m., Freeman walked past the store, peered through the windows and then communicated via cell phone with Ransom. Moments later, Ransom—wearing a dark hoodie slung over his head with a mask covering part of his face—entered the store. While Freeman was allegedly posted outside as a lookout, Ransom is alleged to have brandished a black pistol and ordered the two employees inside the store to remove the cash from the registers and remove the iPhones and cash from the back room safes. Shortly thereafter, according to charging documents, Ransom allegedly exited the back room and re-entered the main store area—still holding what appeared to be a gun—as cops entered the location.

According to the charges, after Ransom spotted the cops retreat from the store, he allegedly exited with the phony weapon in-hand and pointed it at police officers, who immediately began to discharge their weapons. Ransom was shot several times, but survived.

“This was a tragic incident that should have never happened,” former Acting Queens District Attorney Jack Ryan said.

In April, Chanel Lewis was tried a second time for the brutal sexual assault and murder of Howard Beach jogger Karina Vetrano. The first trial ended abruptly in November 2018 when the judge declared a mistrial.

“I just want to say that I’m innocent. I’m sorry for the family’s loss, but I didn’t do this,” Lewis said before Judge Michael Aloise sentenced the East New York resident to life in prison without the possibility of parole for the August 2016 murder of Vetrano, who was pulled from a Spring Creek Park running path, sexually abused, and strangled to death near her Howard Beach home.

In May, Richard Allen Brown, Queens County district attorney for the last 28 years, died in Meadow Ridge palliative care facility in Redding, Conn. He was 86.

Brown succumbed to complications of Parkinson’s disease following a protracted battle with the neurodegenerative disorder. His rapidly declining health forced him to announce that he would resign his post effective June 1, 2019.

In October, City Council voted in favor of a polemic plan to permanently close Rikers Island and replace it with four new borough-based facilities.

The tally was tied to a commitment by the City to invest $391 million—including $126 million in previously planned investments and $265 million in new programming—to reform Gotham’s criminal justice system and address the root causes of incarceration.

In November, Melinda Katz made history when she crushed her GOP opponent Joe Murray on her way to succeeding Richard Brown as district attorney of Queens County—the first woman to hold the office.

The monument features the names of 371 service members who called Queens home and died during the Vietnam War, or served and are classified as “missing in action.” It also recognizes borough veterans who have since lost their lives as a result of their service during the conflict.

“To our veterans of the Vietnam War, we know the sacrifices you made, the sacrifices your families made. The Queens Vietnam Veterans Memorial will help ensure generations never forget, and remind our borough, city and nation to remain ever grateful,” Katz said.