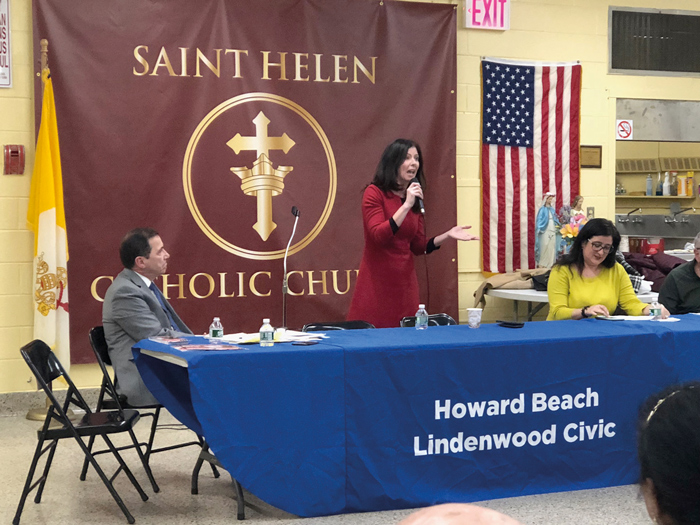 While certainly crowded, the race to succeed Melinda Katz as Queens Borough President has been a noticeably dull affair.

How many of the nine candidates have truly distinguished themselves? Up until Tuesday night, the answer was simple: none.

However, as former City Councilwoman Elizabeth Crowley proved at the Howard Beach Lindenwood Civic’s borough president race forum, a candidate can set themselves apart from the pack for all the wrong reasons.

But at least she showed up. Sorta.

A breathless Crowley breezed into the cafeteria at St. Helen Catholic Academy in Howard Beach about halfway through Tuesday night’s forum. Up until that moment, “Keep Queens Safe” party candidate James Quinn had had the floor all to himself.

You see, despite assuring civic leaders of their attendance, most of the candidates did not attend the roughly hour long get-to-know-you session. Some apparently were experiencing last-minute ballot troubles, while others opted to turn up at a similar assembly in Corona—including Ms. Crowley, who up until about 8:15 p.m. had been glad-handing on the Western side of the borough.

Tardiness aside, we can surely appreciate Crowley’s effort. What we had trouble with were some of her statements and answers.

At times, she simply tossed out tired stump phrases without supporting them with facts.

“I’m a true reformer, against the status quo,” she said.

Crowley said that during her eight years on the council she “was able to put 1,000 more police officers on the street.”

“When I was in the City Council, I worked closely with DOT and NYPD to enforce laws.”

She also said that she “led the fight to push Tom Galante out.”

If the name is unfamiliar, former Queens Library CEO Thomas Galante found himself at the center of a spending scandal in 2014, when several published reports documented his six-figure salary earned during a time in which union custodial jobs were outsourced and expansive reconstruction projects were processed.

The 19-member Library Board of Trustees voted unanimously in December 2014 to ax Galante, who pulled down $392,000 per year. In July 2015, City Comptroller Scott Stringer released an audit and investigative report that painted a vivid picture of a disingenuous and reckless Library under Galante. According to the audit, Galante and other Library executives spent more than $300,000 on prohibited items such as extravagant meals, alcohol, Apple TVs, smokeless ashtrays, airline upgrades, and tickets to a Maroon 5 concert and Disneyland, all while claiming that the Library was running a deficit.

We penned some of those reports. We recall that BP Katz was the first elected official to call for Galante to step down, and that she was vocally opposed to Galante maintaining his authority while Stringer and other city agencies audited the public library system.

Back to Tuesday night. Quinn and Crowley were asked about the recently enacted, controversial bail-reform laws.

“I cannot believe this was allowed to happen,” Quinn said, summing up palpable outrage. “It was irresponsible on the part of the State Legislature,” the 42-year assistant district attorney added.

“I don’t support the law,” Crowley said. “We need to reform it.”

Hey, at least she showed up.