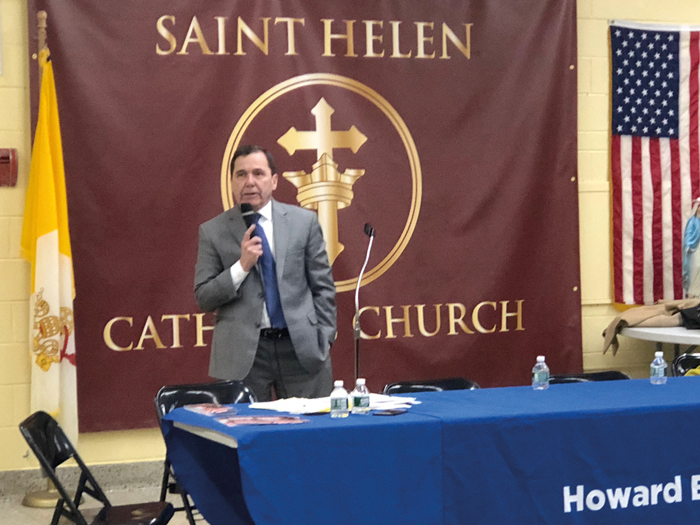 “Crime is trending upward,” commanding officer of the 106th Precinct, Capt. John Costello, said ruefully during the Howard Beach Lindenwood Civic meeting before adding that it’s apparently part of a citywide progression: Crime is up in 59 of 77 City Police Department commands so far this year.

“It’s law—cop’s hands are tied,” Costello said. “The frustration is palpable. Ultimately, it’s the victim who is victimized again.”

According to the latest available NYPD figures, overall crime in Queens South is up 35 percent compared to the same period last year—including car thefts, which have increased a staggering 94 percent. In the 106, crime is up 57 percent over the past 28 days. The most unnerving increases are in grand larcenies (up 65 percent); felony assaults (up 117 percent); and auto theft, which has jumped 366 percent this month, compared to January 2019.

However, as Costello pointed out, a mind-numbing 12 of the 14 reported car thefts this year occurred after the owner hopped out for a quick stop, leaving the keys in and the car running.

“I feel like I’m beating my head against the wall,” the commander said. “The frustration is a lot of this is preventable crime.”

Costello said he has instructed his officers to issue tickets and summonses to any driver who leaves their car running and unattended.

“I have to try to contain the bleeding,” he acknowledged.

The two candidates who showed up Tuesday for the civic’s borough president race forum also ripped elected representatives for passing the bail-reform law, which went into effect on Jan. 1.

James Quinn, who spent the past 42 years as an assistant district attorney and is running on the “Keep Queens Safe” party ticket, said the newly enacted measure “protects the rights of defendants” over victims.

“It was irresponsible on the part of the State Legislature,” Quinn, a Richmond Hill resident, said. “They knew this would happen. Don’t let them tell you otherwise.”

“I find this defendant to be a menace to society,” Andrews said, according to a New York Post report.

Nellis’s attorney appealed the ruling to a higher court. Nellis was subsequently released without bail pending his fitting with a GPS ankle monitor.

Nellis quickly cut off the tracking device. His whereabouts are unknown to authorities.

For more on the BP candidates forum, see the editorial on Page 6.