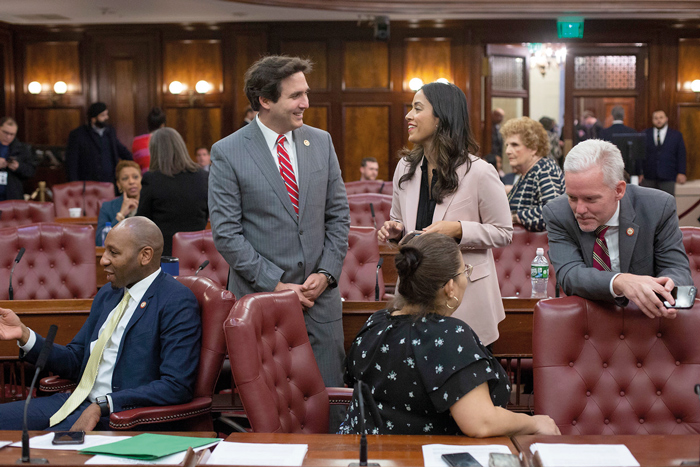 The City Council recently voted in favor of a number of pieces of legislation.

The City Council recently voted in favor of several measures including one aimed at boosting affordable retail space in NYC communities.

Introduction 1408-B would require that where the City provides substantial funding for a development project, a neighborhood retail-needs assessment must be performed to determine whether the project will provide commercial space at below-market rents. The needs assessment would include considerations related to the commercial diversity of the neighborhood, as well as commercial vacancy rates and retail needs in the community.  Such retail space would not be provided to a chain business, and would not be included in projects for which retail space would hinder the provision of a community program, service or benefit. The bill would require the City to account for its decisions through annual reporting.

The legislation’s sponsor, Councilman Rafael Espinal, Jr. (D-Brooklyn), noted that it’s “part of a broader conversation around how to keep rents affordable for all small businesses in NYC. Affordable housing developments have to take a holistic approach to what their footprint in the neighborhood is going to be. Just as we have set-asides to address the affordability crisis for tenants, we must have set-asides to tackle the growing vacancy crisis for small businesses. Protecting New York’s small-business culture starts with a recognition that the rent has become unaffordable for way too many commercial tenants. This legislation is a step in that direction, and I hope it will bring more attention to the struggles our small businesses face.”

The city’s legislative body also recently approved Intro. 1281-A, which would prohibit food and retail establishments from refusing to accept cash from customers. The bill would also prohibit establishments from charging cash-paying customers a higher price than those using credit. The prohibition on cash-less practices would not apply where the food or retail establishment has on its premises, a machine that converts cash into a prepaid card that can be used to make unlimited purchases on any priced item, at no additional cost to the consumer. Additionally, food and retail establishments do not have to accept bills in denominations of greater than $20; and transactions taking place completely online, by phone or mail are excluded.

“No longer in NYC will brick-and-mortar businesses have the right to refuse cash and effectively discriminate against customers who lack access to credit and debit,” Torres added. “The City of New York cannot allow the digital economy to leave behind the 25 percent of New Yorkers who are chronically unbanked and underbanked.”

Additionally, the council recently green-lit Intro. 1785, which would extend health insurance coverage benefits to surviving family members of deceased municipal employees who died as a natural and proximate result of an accident or injury sustained while performing duties for the City or who died because of a condition as related to the World Trade Center.