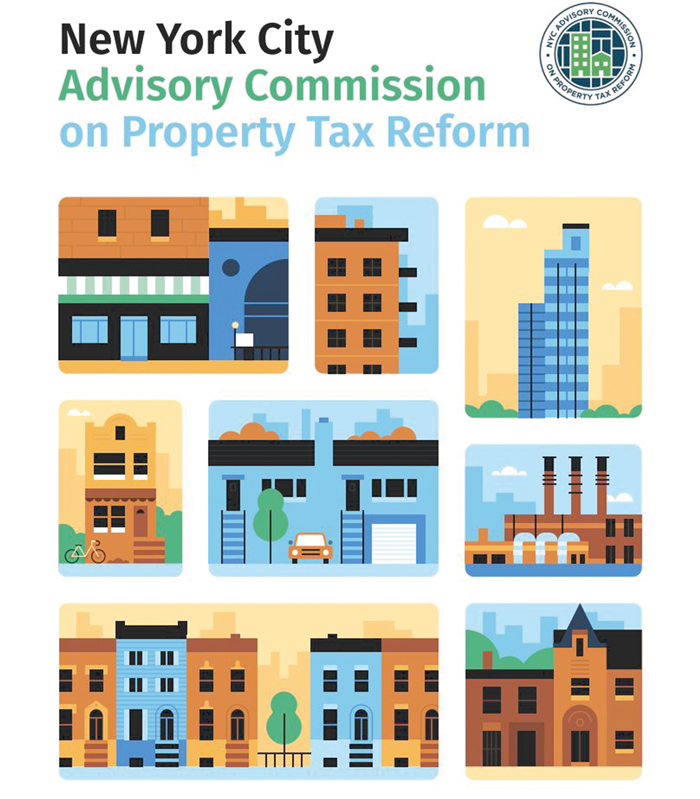 The City Advisory Commission on Property Tax Reform on Friday released its Preliminary Report with an analysis of the City’s property tax system and a set of 10 initial recommendations for improvement.

The six-member panel, which was appointed by Mayor Bill de Blasio and City Council Speaker Corey Johnson in May 2018, reached consensus on 10 initial recommendations for NYC property tax system reforms:

The commission recommends moving co-ops, condominiums, and rental buildings with up to 10 units into a new residential class along with 1- to 3-family homes. The property tax system would continue to consist of four classes of property: residential, large rentals, utilities, and commercial.

Use a sales-based methodology to value all properties in the residential class.

Assess every property in the residential class at its full market value.

The commission recommends that annual market value changes in the new residential class be phased in over five years at a rate of 20 percent per year, and that Assessed Value Growth Caps should be eliminated.

Replace the current class share system with a system that prioritizes predictable and transparent tax rates for property owners. The new system would freeze the relationship of tax rates among the tax classes for five-year periods, after which time the City would conduct a mandated study to analyze if adjustments need to be made to maintain consistency in the share of taxes relative to fair market value borne by each tax class.

Current valuation methods should be maintained for properties not in the new residential class (rental buildings with more than 10 units, utilities, and commercial).

Institute comprehensive reviews of the property tax system every 10 years.

“The commission, I charged them, as did the City Council—I said ‘Go get us a system that is a lot fairer and clearer. We can’t lose revenue, we have to pay for Police and Fire and Sanitation and schools and all, but within the revenue we have now, get us a more fair system and look out for people who, a lot—for seniors in particular—a lot of folks who are lower income have a house but don’t have a lot of cash. We have to take account of them as well,’” de Blasio said Monday evening on “Inside City Hall” on Spectrum News NY 1. “So, what’s been proposed by this commission I think is absolutely in the right direction. We’re going to equalize the tax levels across neighborhoods. It will be phased in. It’s not going to be too much of a shock to the system.”