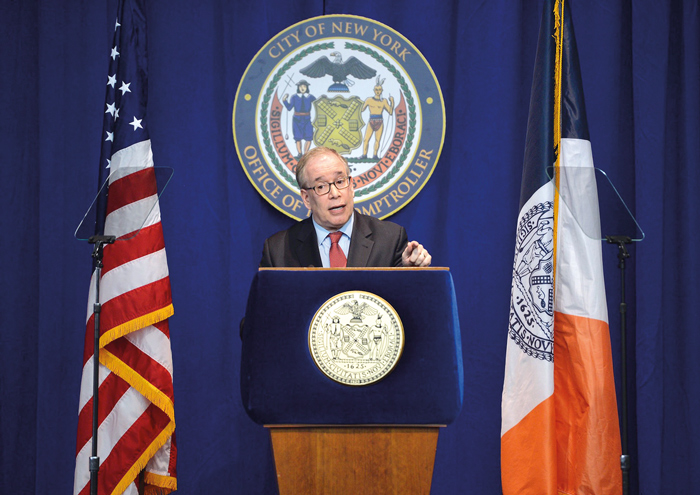 An impromptu battle of the plans erupted in the Big Apple this week as the de Blasio administration boasted Monday that it had bankrolled 25,889 residences in 2019—including 15,692 affordable homes preserved and a record-breaking 10,197 new affordable homes financed—five days after City Comptroller Scott Stringer proposed an immense five-borough strategy to “fundamentally realign New York City’s failed approach to our housing crisis.”

“We are fighting to create a City that New Yorkers can afford to call home. With every affordable apartment, we are stabilizing the lives of families across the City, but we are not stopping there,” said Mayor Bill de Blasio “From establishing the Mayor’s Office to Protect Tenants to giving New Yorkers the representation they need to fight off eviction, we have the backs of tenants as we continue to ensure that New York is the fairest city in America.”

The City Department of Housing Preservation and Development indicated on Monday that it is “making significant progress toward its goal of 300,000 affordable units by 2026…”

In November 2017, Hizzoner released “Housing New York 2.0,” laying out new tools and programs to build and preserve affordable homes for 300,000 Gotham families by 2026—up from the previously announced goal of 200,000 homes by 2024.
According to the administration, under the accelerated and expanded plan, the City will boost the number of affordable homes for seniors and families to 25,000 per year, while also increasing resources and strategies for affordable homeownership programs and not-for-profit organizations purchasing rent-regulated buildings to preserve affordability. The resources and strategies actually will help create 200,000 affordable homes two years ahead of schedule—by 2022—de Blasio said. 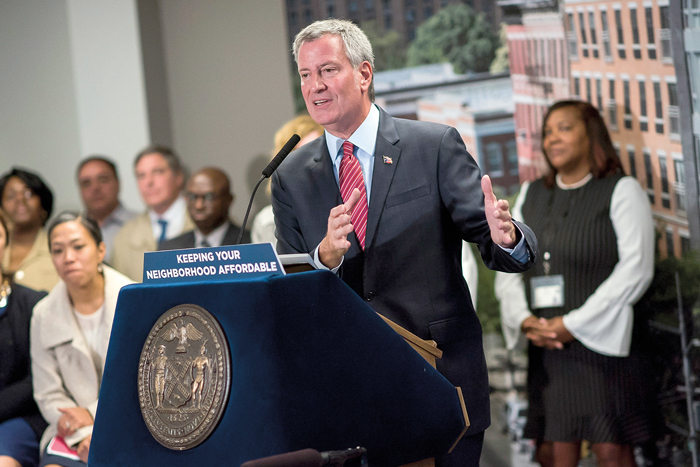 Stringer last Wednesday seemingly scoffed at HNY. A recent analysis by his office found that the “affordable” housing created by the de Blasio program is too expensive for as many as 435,000 of the city’s most severely rent-burdened households. Just one third of the newly-constructed housing units through the end of Fiscal Year 2019 were within the reach of extremely low and very low- income households (defined as households making 30 percent and 50 percent respectively of area median income, or $28,830 and $48,050 respectively for a family of three).

And the comptroller’s probe also found that nearly 565,000 New York households pay over half of their income for rent, are severely overcrowded, or have been in homeless shelter for over a year. De Blasio’s plan has wasted City resources billions of dollars on inscrutable tax subsidies to real estate, on ineffective approaches to homelessness prevention, and on unrealizable paths to homeownership, according to the comptroller.

With “Housing We Need,” Stringer has proposed: a universal requirement for 25 percent permanently low-income affordable housing in all new as-of-right development with 10 or more units; an end to the longstanding 421-a tax subsidy program for developers, which, according to Stringer, costs the City more than $1.6 billion per year and has proven “highly inefficient” in its production of affordable housing.

“We need to fundamentally change the bargain between the City and the real estate industry,” he reasoned. “We can’t keep spending billions and billions and getting so little in return.”

Stringer’s plan further calls for the expansion of affordable homeownership programs; the redirection of existing capital dollars to extremely and very low-income housing construction; and the creation of a New York City land bank that would facilitate the transformation of vacant city-owned properties into affordable housing.

“The power in this approach lies in its simplicity: If you’re going to build in New York City, you will provide affordability that is sustainable,” Stringer said. “You will be part of the solution. No longer will developers be able to use affordable housing as a bargaining chip with communities.”

Stringer noted that this comprehensive housing strategy was built on six years of analyses, audits, and reports on an affordability crisis that is, he posited, “the culmination of decades of sticking our heads in the sand, of kicking the can down the road, of applying Band-Aids when we needed surgery.”

As he unveiled “Housing We Need” in Washington Heights last week, the comptroller said the time to act and “be daring” has arrived.

“The moment for piecemeal, siloed, incremental plans is long-past. In fact, I don’t believe that moment ever really existed,” Stringer said. “From creating universal affordability in every corner of every borough, to leveraging City-owned property to build the housing we need for the New Yorkers who need it most, to ending ineffectual tax giveaways to the real estate industry when we aren’t getting enough real affordable housing in return, to realizing the dream of owning a home in the greatest city in the world…let us have the courage to break the cycle and build the New York we need—finally.

“The price of entry to New York City cannot be a million-dollar condo. We must make room here for everyone,” the comptroller continued. “We came here today to ask one question:  Who is New York City for? Our answer is loud and clear. This is your city, and your city cannot be bought. This is the time for action, rooted in justice for all. Our children, our neighbors, our city, and our future demand nothing less than the housing we need.”