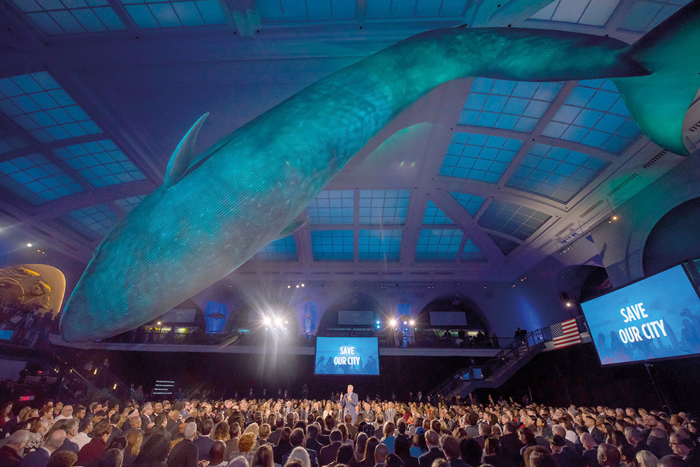 Mayor de Blasio delivered his seventh State of the City address on Thursday at the Museum of Natural History.

With just two years remaining on his second term, Mayor Bill de Blasio on Thursday chose the Museum of Natural History as the dramatic backdrop for his seventh State of the City address, during which Hizzoner implored residents to help his administration “save our city.”

“New York City is the greatest city in the world, but many New Yorkers have real fears that the city they love is slipping away,” de Blasio said. “From making pre-K universal, to creating the safest big city in America, we have accomplished so much together, but we need to go much farther. We must make New York City easier to afford, protect the mom-and-pop businesses that make New York, New York, and hand this city back to the people who make it so great.”

De Blasio detailed several proposals as part of his 2020 agenda. The proposals that seem to have been getting a lot of ink this week are the ones related to improving the affordability and quality-of-life of all residents:

Legalize Basement Apartments: According to de Blasio, the City will take the first steps to legalize basement apartments and accessory units by updating zoning laws, introducing legislation to cut through red tape, and helping homeowners pay for it. The mayor has pledged to set aside capital funds to finance low interest loans to homeowners hoping to create safe and legal affordable apartments on their property. These measures will add approximately 10,000 more affordable homes within the next decade, according to Hizzoner. 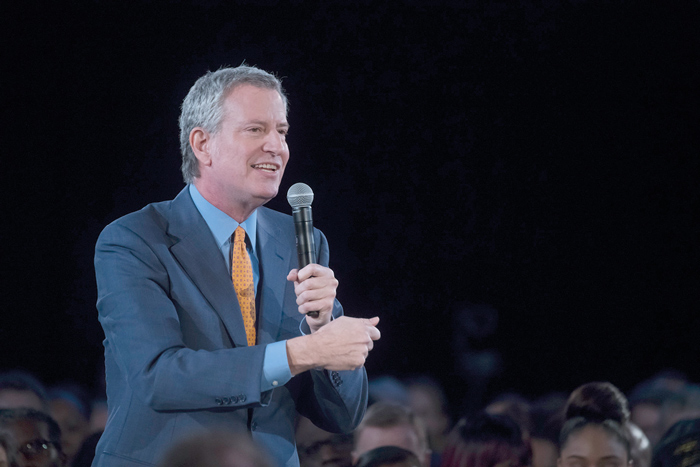 Photo Courtesy of Ed Reed/Mayoral Photography Office
“New York City is the greatest city in the world, but many New Yorkers have real fears that the city they love is slipping away,” Mayor de Blasio said.

Rent without a Security Deposit: Starting with up to 60,000 City-financed homes, the mayor has promised to offer renters a choice to pay a security deposit or to sign up for renter security insurance that allows small monthly payments or a smaller single upfront payment in lieu of the full month deposit. De Blasio said the City will also pursue local and state legislation to expand these alternative options citywide to all of New York’s 2.2 million rental households.

Universal Renter Protection: The administration is advocating for the State Legislature to pass new tenant protections that will help shield the 2.5 million New Yorkers who live in nearly 900,000 unregulated homes from steep rent shocks and arbitrarily losing their leases.

“Our City is battling a full-blown affordability crisis, and the City’s housing plan has left tens of thousands of New Yorkers behind with housing that is not truly affordable. I have long called for the City to refocus our resources on building housing for the New Yorkers with the greatest need—families in shelters or who are one paycheck away from homelessness,” said City Comptroller Scott Stringer. “I commend this step in the right direction, but the massive scale of our housing crisis demands we do more: 565,000 New York households pay over half of their income in rent, are severely overcrowded, or have been in a homeless shelter for over a year. All of them deserve safe, affordable housing, and it’s our responsibility to upend the status quo, break through existing policy paradigms, and build the housing New Yorkers need—finally.”

De Blasio has also pledged to deploy 300 Youth Coordination Officers to every NYPD precinct, “where they will help young people access positive community resources and will be resident precinct experts for all youth-related matters.” Additionally, the City will:

Create a NYPD Vision Zero Unit: This new unit will consist of over 100 personnel and expand enforcement against the most dangerous behaviors on Gotham streets: speeding, red-light running, and failure to yield to pedestrians.

Make Streets Safer near Schools: The City is installing 1,000 new lights, stop signs, and speed bumps around schools and in neighborhoods.

In his 2020 State of the City address on Thursday, de Blasio said his administration is poised to launch “a second wave of the Green New Deal that will green our energy, cut vehicle emissions, and ban more wasteful plastics—all so the nation’s largest city can become carbon neutral.”

Other climate change-influenced proposals include:

Double Solar Power: The administration will launch a new program to defray upfront costs of solar power, letting homeowners pay for them over years out of the savings on their energy bills, de Blasio promised. The Citywill help install solar panels on 50,000 one- to four-family homes—doubling the amount of solar power produced in New York City and creating 5,000 green jobs.

Make all City Vehicles Electric: The mayor indicated that he will issue an Executive Order to have all on-road vehicles in the fleet be plug-in electric by 2040. By 2025, 4,000 vehicles will be replaced or converted to electric, and by 2040, the City will work to make the entire municipal fleet—every garbage truck, every ferry, every ambulance and every police cruiser—fully electric. The first electric school buses will hit the streets this year, de Blasio added.

End the use of Fossil Fuels, including Natural Gas: By 2040, the City will still stop using natural gas and other fossil fuels in large building systems in the five boroughs, starting in government buildings. The City will work with lawmakers to ensure that new permits for building systems are aligned with the previously established goal of carbon neutrality by 2050.