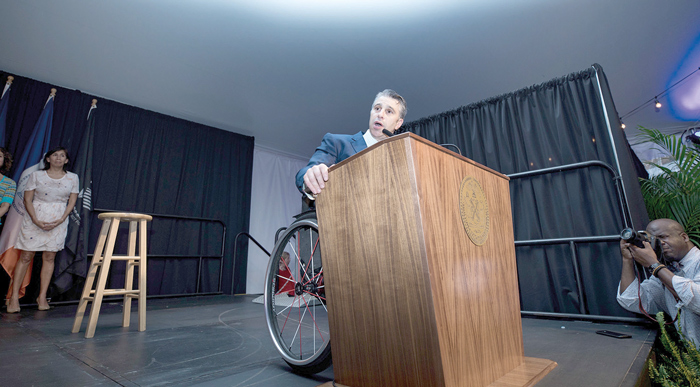 “I pledge to advocate for a transit system that works well for everyone—including the millions of New Yorkers and visitors who have intellectual/developmental, vision, hearing or physical disabilities,” Victor Calise said Monday.

If Calise, commissioner of the Mayor’s Office for People with Disabilities since 2012, is approved by Gov. Andrew Cuomo and the State Senate, he would be the only wheelchair-bound board member and the first ever member of the MTA panel with a self-disclosed disability—something Calise characterized as “an important responsibility that I will not take lightly…[I] pledge to advocate for a transit system that works well for everyone—including the millions of New Yorkers and visitors who have intellectual/developmental, vision, hearing or physical disabilities.”

As commissioner of the MOPD Calise is responsible for ensuring that NYC is the most accessible city in the world; advises the mayor and agency partners on accessibility issues, spearheads public-private partnerships, and chairs the Accessibility Committee of the city Building Code.

“Victor’s relentless pursuit to make New York City the most accessible place in the world is exactly the type of ardent leadership we need on the MTA Board,” de Blasio said. “Victor believes in his heart that it is our civic and moral duty to make our subways, buses and Access-A-Ride services more inclusive for everyone. From his rich personal history and longtime advocacy for the disability community, Victor will make a great addition to this board.”

According to the administration, Calise is a recognized expert on accessibility and regularly consults with high-level public and private stakeholders about inclusive best practices. He is frequently invited to national and international conferences and has given numerous keynote speeches, including in Italy, Israel, and the United Arab Emirates. Calise earned degrees from borough institutions St. John’s University and Queens College. He also competed in the 1998 Paralympic Games in Nagano, Japan, as a member of the first U.S. national sled hockey team.

“We desperately need to improve the accessibility of our subways, and I know Victor will be a strong voice for this issue. Also, Victor’s a New Yorker, so I know he will push the board to focus more on the needs of bus and subway riders, which is a priority of mine as well,” said City Council Speaker Corey Johnson. “I urge the State Senate to confirm him swiftly.”

Assemblyman David Weprin (D-Richmond Hill) called Calise “an outstanding choice” for the board.

“As commissioner of the Mayor’s Office for People with Disabilities, Commissioner Calise has been an outstanding advocate for accessibility and under his leadership, New York has made significant progress in improving access across the city,” Weprin added. “As part of the MTA’s leadership, I am sure that Commissioner Calise will continue his work to improve access, this time for our city’s buses and subways; and I fully support his nomination to the MTA Board.”

According to the agency, the MTA is governed by a 21-member board. Members are nominated by the governor, with four recommended by the mayor and one each by the county executives of Nassau, Suffolk, Westchester, Dutchess, Orange, Rockland, and Putnam counties.