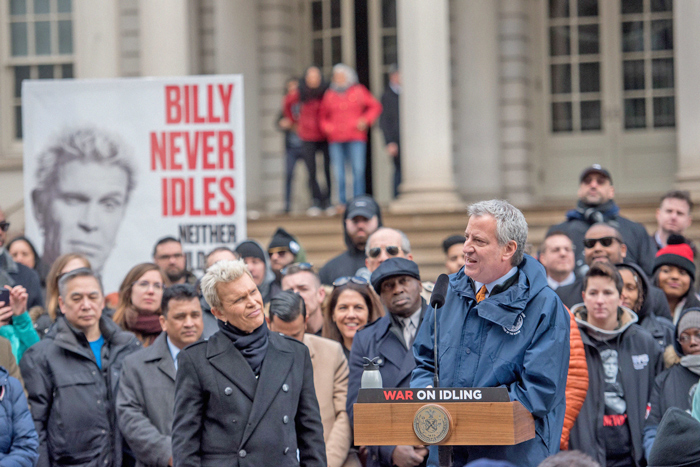 “We’re sending a loud message with a ‘Rebel Yell’: Turn off your engines or pay up,” Mayor de Blasio said with a smile, and legendary rocker Billy Idol (l.), on the steps of City Hall.

“We’re sending a loud message with a ‘Rebel Yell’: Turn off your engines or pay up,” Hizzoner said with a smile on the steps of City Hall.

According to the administration, the million-dollar ad campaign launched throughout the five boroughs and features Billy Idol and his message “Billy Never Idles, Neither Should You. Shut your engine off.” The effort includes 12 high-profile billboard locations, gas station TV, radio, and multiple social media platforms (hashtag #billyneveridles), as well as LinkNYC and NYC TaxiTV, exposure and placement on City fleet vehicles equipped with anti-idling and emission control technology.

“Like most New Yorkers, I’m troubled when I see cars and trucks sitting idle while polluting our neighborhoods,” Idol added. “New Yorkers are some of the most hardworking, passionate people in the world and I hope they will join me in turning off their engines.”

The City will also be adding seven air and noise inspectors to the Department of Environmental Protection to help process the increased complaints. The inspectors will focus on verifying and compiling citizen complaint filings sent to the Office of Administrative Trials and Hearings and help increase inspections of priority zones identified by 311. This builds on the efforts of Local Law 58 of 2018, sponsored by Councilwoman Helen Rosenthal (D-Manhattan), which expanded the citizen enforcement program.

These efforts will be overseen by an interagency task force comprised of individuals from the NYPD, Department of Environmental Protection, Department of Sanitation, and Department of Transportation. The task force will convene for the first time in the coming weeks to discuss further tactics to curb idling pollution.

According to the City, every year, motor vehicles contribute approximately 11 percent of the local fine particulate matter and 28 percent of the nitrogen oxide emissions. High levels of fine particulate matter, nitrogen dioxide, and nitric oxide continue to be observed in areas of high-traffic density, building density, and industrial areas, including Western Queens, South Bronx, and Northern Brooklyn. These pollutants have been linked to adverse health outcomes, including an exacerbation of cardiovascular and respiratory disease.

“Every New Yorker deserves to breathe clean air,” NYC Chief Climate Policy Advisor Daniel Zarrilli said. “That’s why we are launching a new campaign to reduce idling, a zero-cost way to save money, cut down on the carbon pollution that causes climate change, and improve air quality all over the city.”