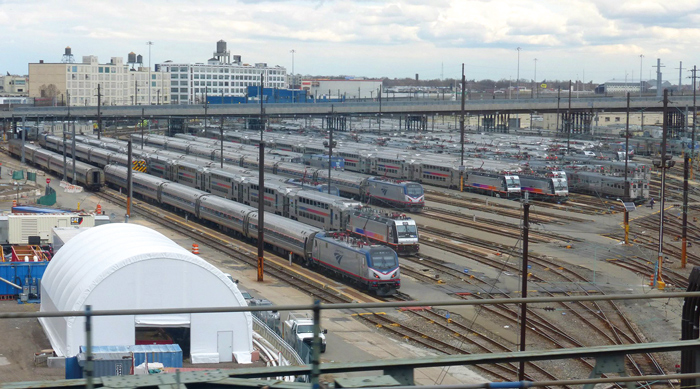 At 180 acres, Sunnyside Yard is the only centrally-located, transit-accessible site of its size remaining in the five boroughs.

After decades of wrangling, administration officials indicated that the new, “once in a century” framework will focus on building new public transit first and making all housing affordable, with a focus on New Yorkers earning less than $50,000 per year.

The culmination of more than 18 months of community engagement and technical analysis, the Master Plan calls for the creation of the long-sought Sunnyside Station, 100-percent affordable housing with 12,000 homes, 60 acres of new open space, equitable homeownership opportunities, and infrastructure and other public amenities on a publicly controlled site equal in size to Roosevelt Island.

According to the administration and Amtrak, the plan provides a blueprint for the construction of a deck structure over the rail yards that would support streets, infrastructure, open space, and buildings.
In addition to the design of the deck structure, the plan “responds to urgent priorities identified by New Yorkers during the planning process. It will ensure that public priorities drive the future of the yard and is intended to be implemented in many phases over multiple decades, beginning with key investments in public infrastructure, proposals for a new street grid, open space network, infrastructure, and public transit options,” officials indicated.
Responding to community input throughout the planning process, the Master Plan takes a transportation-first approach. Specifically, participants consistently expressed that Sunnyside Station—a new regional rail station to be built in Sunnyside Yard next to Downtown Long Island City—is a top priority for Western Queens and must be built first. In response, the City is committing to making a substantial funding contribution for Sunnyside Station to make the project a reality. The City has said that it will immediately begin conversations with the Metropolitan Transportation Authority about how to fit this into its capital planning.

“The first step in this decades-long plan must prioritize infrastructure investments, and I am encouraged that the Master Plan includes the Sunnyside Station in its first phase,” said U.S. Rep. Carolyn Maloney (D-Queens, Brooklyn, Manhattan). “Long Island Railroad, Amtrak and NJ Transit are already coming in to Long Island City’s Sunnyside Yard, and with Penn Station Access under construction to bring Metro North through the yard, it would be shortsighted to allow so many transit system to converge without providing station access for passengers. Creating this transportation hub will allow many new economic opportunities, while servicing a neighborhood that suffers from a lack of investment. While I am initially encouraged by the proposal for the Sunnyside Yard Master Plan governance entity, it is necessary that this continues to be a community driven process and I will not support plans that abandon this approach.”

Both the City and Amtrak have indicated that they have committed to forming a nonprofit planning entity in partnership with local elected officials, community members, and other key public stakeholders. This entity will steward implementation of the Master Plan and ensure that future decisions reflect the public priorities established by the Plan, including affordable housing, open space, transportation, and sustainability goals, and help coordinate early investments such as Sunnyside Station.